Taylor Whitworth is a Research Associate at Evidera, a consulting firm that provides health economics, outcomes research, market access, data analytics and epidemiology services to large pharmaceutical companies. Taylor studied International Relations at James Madison University and has a Masters in Healthcare Administration from Georgetown. Tylor Hess is a PhD. candidate in Mechanical Engineering at MIT. Tylor and I met in yoga teacher training during spring 2014, while he was taking a year away from his studies. He is one of the most integrated thinkers I’ve met, of any age. We share analytical bents, yoga, and meditation practices. We also shared brunch at Cambridge Brewing Company in Cambridge, MA on Taylor’s 27th birthday.

TH – I don’t have much to say about this, though I’ve given it some thought. My ideas run in different directions, but I have no one great guess. The future is hard to predict. Consider the quote attributed to Henry Ford, “If I had asked my customers what they wanted, they would have said faster horses.” We don’t have a paradigm of how to analyze forward.

The places I go mentally are not positive. There’s this surge of dystopian books and movies among my generation. I attribute it back to that image of the earth that was taken from space in 1969; this blue green ball in a sea of black. It defined us as finite. Before then, every image was from the top of a mountain or even an airplane. Regardless, the earth stretched as far as we could see. That image from space showed our limits. It triggered the environmental movement.

Our relationship to the planet is all wrong. We treat resources as commodities. We talk about ‘producing’ oil, not depleting oil.

In my lifetime we will encounter shortages so severe they may trigger wars. Over issues like clean water. Probably not in California, although whose idea was it to build a city in the desert. More likely we’ll see violence in Bangladesh or another developing location. 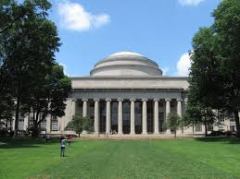 The scientific consensus is that MIT’s campus will be underwater within 100 years. Who could have predicted that when the campus was built 100 years ago? We only find out this things after the fact, when it is often difficult, expensive, or impossible to address. Like these dead zones we’ve discovered in the oceans, masses of water so devoid of oxygen they cannot support life. Will these expand or come to the surface? What will this mean for our water systems?

Or take animal extinction. Species are becoming extinct at a rate 1,000 times faster than historical models.

Just so you know, I am going pessimistic here, then I’ll go optimistic. Bum you out then build you up.

The past is not an indicator of the future, especially if you base your predictions on scientific fact. The industrial revolution led to the technological revolution. This has resulted in an underdevelopment of how we get along. This disconnect between our technical ability and social organization plays out daily on both a massive and small scale.

Start-up companies create an innovative culture at a small scale, but there are no precedents at larger scale – the scale of government or countries. We have no precedent for the cooperation we will need to address global warming. There has never been a problem that affected every corner of the world and required such coordinated action.

TW – Human behavior is fungible. We can twist and bend but only to a point.

TH – Have you seen Gattaca? It’s a 1990’s sci-fi thriller that deals with DNA modification. Now, DNA modification is possible but the ethical issues have not caught up with the science. Do we want to control the intervention of gene lines? We think we can make improvements, but what if don’t improve? What if we create ill side effects? What if getting a disease switches from something that comes from God to something derived from human error? 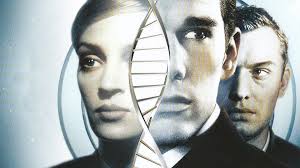 The United States is not going to lead in this, given our Christian foundation, but others will take this on. We will miss out leading the exploration of humans with greater speed and strength, or the creation of a servant, zombie class.

TW – The focus should be on improving the quality of our lives, not design optimization. When something is random, it’s no one’s choice. Once we are ‘designed’ we lose our ability to make choice. Our lives are predetermined by our formulation.

Our plates have been empty for some time. The waiter comes by with the check. Tylor motions for him to lay it on the table, and says, “We are going to be here awhile.” Taylor and I exchange looks and laugh. “Remember, he began with, ‘I don’t have much to say about this.’”

TH – That was a tangent, genetics. Let’s go back to tomorrow. Speed is an important consideration. Mohr’s law posits that the speed of computing doubles every two years. Related laws in other disciplines also indicate a huge acceleration in the rate of change of many systems on earth. But from a systems dynamic perspective, every system follows an S-curve. Whatever the system is, it grows increasingly fast until it runs up against an inhibitor. Then it flattens. Mohr’s law will not hold forever. Computing speed will hit an inhibitor, at the atomic level, and it will not continue to increase as rapidly as it does today. That will happen with other systems as well – population, production, climate. Right now we are at a point where many systems are accelerating, and we don’t even know what the inhibitors are.

We might be on the cusp of enlightenment, to move from a focus on extending life to a focus on improving life. Look at therapy. Since the 1980’s every form of therapy has included more focus on mindfulness. Religion is at an odd place. The growth is strongest at each extreme – fundamentalism and atheism. What if a religion based on a less defined sense of God actually took off? The legacy of existing culture argues against this happening, but humans have precedent for religions based within us, it’s possible.

In software development we hack / edit/ augment a program up to a point to tweak it to address new problems. But at some point the code does not address our needs and we refactor. That’s what humans need to do – refactor. We need a non-violent revolution. We may be able to use the tools within our existing government to radically change it. But if not, we need to refactor.

Thomas Jefferson anticipated that the United States might have a revolution every 20 years. We are long overdue.

It’s possible to refactor incrementally. We could change the government bit by bit – first make the post office relevant, than another sector, then a third. The challenge is that when you refactor incrementally, each revised system still has to interface with existing, antiquated systems. Still, it can be done.

The cool thing about our generation is that we’re fickle. And we’ve bought into American values, i.e. money. Not exactly a recipe for revolution. But, if you want to make heaven of hell and hell of heaven, you just have to reassess values. Fickleness can actually help us here. Want to learn patience? Reassess your values. Reframe sitting in traffic as mediation and it won’t bother you anymore.

TW – Context is everything. The world of yoga has one set of values; corporate America has another. A wonderful person can become an executioner in the right context.

Humans can hold within us completely contrasting ideas. These mental dissonances can lead to psychological stress and disruptive actions. We have the ability to be divisive, even within ourselves. Yet we also have the capacity, and can work toward, coherence.

Look at politics. If the Republicans want less government, why do they put such emphasis on creating social restrictions? The Democrats are equally inconsistent.

TW – The Republican dissonance is more extreme right now. They may wind up splitting in two. The extremes are tearing against the center. Look at Mitt Romney. He’s not such a bad guy, but he got pulled all over the place.

TH – We are bonobos and we are orangutans, and the question is, can we program the orangutan out of ourselves?

TW – Can we create an environment that fosters our orangutan side?

TH – Look at alligators, so angry all the time. They have this huge Abdulla mandala. It’s a biological explanation. Did you hear about the nice guy who turned sexual predator? This is not a joke. They discovered he had a tumor that caused his behavior. They took out the tumor, and he stopped. Then he started again and you know what, the tumor had reappeared.

TW – There are no good or bad people. We are functions of our environment.

TH – We have to understand that better. We have to stop thinking that that we are 100% in control. 95% of what we do is on autopilot; maybe 5% is actual creative activity. If we can reorient our 95% autopilot actions in a more positive direction, we can change. For me, meditation is reprogramming my autopilot self to react with positive responses.

After two hours of discussion that touched on evolution, revolution, psychology, technology, extinction and extraction, we ended within our own core. This brought us full circle to Tylor’s first comment of the afternoon, when he talked about graduate student life.

TH – I am loving life so much more since I stepped away from so many activities. I was involved in all of these activities that were existentially what I wanted, but classes, research, and meditation all suffered. Since I started focusing on those basics, my day to day is better. It’s like the oxygen mask that drops down in the plane in an emergency; you have to put your mask on first before assisting others. I wasn’t living as I wanted at MIT. I was doing stuff I wanted to do, but not being the person I want to be.

Greetings reader. I am a writer, architect, cyclist and father from Cambridge, MA. My primary blog, theawkwardpose.com is an archive of all my published writing. The title refers to a sequence of three yoga positions that increase focus and build strength by shifting the body’s center of gravity. The objective is balance without stability. My writing addresses opposing tension in our world, and my attempt to find balance through understanding that opposition. During 2015-2106 I am cycling through all 48 mainland United States and asking the question "How will we live tomorrow?" That journey is chronicled in a dedicated blog, www.howwillwelivetomorrw.com, that includes personal writing related to my adventure as well as others' responses to my question. Thank you for visiting.
View all posts by paulefallon →
This entry was posted in Responses and tagged bonobos, Evidera, Gattaca, Georgetown, meditation, MIT, Mitt Romney, Taylor Whitworth, Thomas Jefferson, Tylor Hess, yoga. Bookmark the permalink.