Jim Merkel is an aeronautical engineer who walked away from a conventional career in San Luis Obispo, CA, became a bicycle activist, wrote the book Radical Simplicity, lived off the grid in British Columbia, travelled throughout the developing world, was Director of Sustainability for Dartmouth College, and is now an environmental educator.

Jim became a parent in his fifties. He and his partner Susan searched throughout New England for a community where they wanted to set roots and raise their son Walden. They chose Belfast, Maine, purchased 40 acres on a hill overlooking town, lived in a yurt while they built a super-insulated house from wood milled from clearing their land, and moved into their permanent residence just over a year ago. They are completely off-grid: solar hot water and heat, wood stove back-up, and photovoltaic electric.

Although Susan and Jim are conscious of how they live, they enjoy creature comforts beyond what I think of from living off the land. They own a car, garden with a tractor, and enjoy a 30-foot sailboat. Their home has high quality finishes and is spacious enough to provide both places to congregate as well as individual privacy. They don’t own a television, but otherwise the chaos a five year old brings to a house is evident.

I asked Jim, “How will we live tomorrow?

Our biggest challenge is how to come together as ‘we’ over an issue. When I was a bicycle activist, I studied the Netherlands and how they decided to prioritize bicycle transportation. A series of pedestrian and bicycle accidents, including a few deaths, made people question the wisdom of car domination. This led to conscious changes about how they organized their street system and traffic patterns to make walking and cycling both safer and preferable, while driving became a less desirable option. Accidents declined, the air quality improved, people got healthier. When you needed to drive, it took longer, but the advantages offset this obstacle, and once people adjusted to the new reality that driving wasn’t the fastest way to get around, cycling really took off.

We moved to Belfast because we found a strong collective sense of ‘we’ in this community. Belfast is in its fourth redefinition. It began as a shipbuilding town, then shoe manufactory. In the 1960’s there were giant chicken farms in this area, the kind of mass production now centered in the South. That didn’t last too long, and by the 1970’s this was a very inexpensive place for ‘back to the land’ people. New England doesn’t accommodate large-scale monoculture like the Midwest does, but people can scrape a living from small farms. Those people are the core of this community, which now also thrives from tourism and back-of- 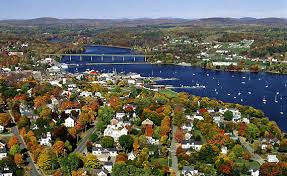 The most dangerous way we can continue is exactly what we are doing now. Native Americans occupied this area for 10,000 years, and evidence indicates that they occupied a one-acre per person footprint. (Acre per person measure is an equivalent consumption index that Jim references throughout his work, and explains in detail in Radical Simplicity. The index equates all of our energy use into land-based equivalents.) Contemporary Americans have a 20-acre per person footprint. There is simply not enough energy or space on the planet for everyone on earth to consume at that level. The level to which the earth will sustain people is a science; it is determinable.

Part of the challenge is that sustainability deteriorates too slowly to see in a short timeframe. When you look out your backyard, nothing looks bad. But consider the loss of fish life over the past twenty years; it’s drastic. Humans accommodate a new normal over a shorter horizon. Ironically, there are still plenty of lobsters. They have no predators now and they thrive.

The reality is that we have no idea how we will live tomorrow. However, when I teach environmental courses I often play, a television game with participants. Not television as in the machine, but television according to its true meaning: to telescope vision. I ask people to go twenty years into the future. I say, “We are in a 100% sustainable world. There are no wars; there is no hunger. You wake up in the morning and remember that the world is sustainable and will continue in health balance. What does that mean?”

First, you relax. Then I ask people to describe what that day looks like. We do this in pairs, with one person acting as active listener for the other. Every pair sees a beautiful vision every time. We are able to envision a beautiful future. That is the first step to creating it.

Look at what we did with cycling in San Luis Obispo. We began with visioning exercises. This led to a policy document we presented to the city. The city had proposed $20,000 for bicycle lanes. We asked for $400,000. We made a persuasive argument, and got $200,000. We never would have gotten it without organization and vision.

So, how will we live tomorrow? We have to build the skill set for living together. We have to ask for what we want and not settle for what we think we can get. If our leaders would lead, we could do this within six months. But they won’t. A tiny group of people are making millions and have great incentive to keep things as they are, short-sighted as that is; while we, the majority, are not organized. We are complacent.

The powers vested in the status quo are very successful in navigating the media. Look at NPR. They have a sponsor that says, “Natural gas; think about it.” I don’t want to think about it. I don’t want to consider the pros and cons of fracking. I want to acknowledge that every time we extract a resource that is forever gone, we are not sustainable.

The jury is out on whether social media can coalesce people to action. People have big hearts, and they care. They care about their kids and family and their future. But every day is spent in getting by; they have nothing left to galvanize them to action. I don’t think that many people find time every day to think about their lives.

When I work with college students, I give them a visioning exercise. “What do you love?” I ask them to answer that question and turn it into a life plan. So many people are in unsatisfying careers. They start with a vision – youths have innate vision – but life drains it. Then, you wake up and have a mid-life crisis.

The way we have to live tomorrow is to manifest our vision. Live inside our wildest dream. I hear from so many people who read my book and then quit their jobs. But that is not always good plan. You have to have a vision of what you want instead.

One year, when I was at Dartmouth, all freshmen were required to read Tracy Kidder’s book, Mountains Beyond Mountains. One group of students was so inspired they began the Public Health Initiative. If you introduce people to the service option versus the profit and privilege option, at least some will choose service. But most of us are shown privilege as the only viable option.

We don’t have to throw away capitalism to become sustainable; we just have to tweak its priorities. Harvard has a $13 million Green Loan Fund that has annual returns of 32%. The 2008 bank bailouts would have gone far in eradicating world poverty. Instead, we just threw that money to the banks.

The degrowth movement is gaining traction. Easing us to a better balance with all of earth’s systems. We can decline our population, revise our expectations on standard of living and come into sustainable balance. The Transition Handbook by Rob Hopkins is a good starting point. Take the Stockholm Resilience Centre’s Nine Planetary Boundaries as limiting parameters.

I am not a religious person, but the Buddhist tradition resonates with me: What is the point of hope? If I am in the moment, present, doing what I know I have to do to care for myself and my planet, I can live at peace.

Greetings reader. I am a writer, architect, cyclist and father from Cambridge, MA. My primary blog, theawkwardpose.com is an archive of all my published writing. The title refers to a sequence of three yoga positions that increase focus and build strength by shifting the body’s center of gravity. The objective is balance without stability. My writing addresses opposing tension in our world, and my attempt to find balance through understanding that opposition. During 2015-2106 I am cycling through all 48 mainland United States and asking the question "How will we live tomorrow?" That journey is chronicled in a dedicated blog, www.howwillwelivetomorrw.com, that includes personal writing related to my adventure as well as others' responses to my question. Thank you for visiting.
View all posts by paulefallon →
This entry was posted in Responses and tagged bicyling, cycle, Jim Merkel, Nine Planetary Boundaries, Radical Simplicity, Rob Hopkins, sustainability, The Transition Handbook. Bookmark the permalink.