I rose early to tackle the Allegheny Ridge, the steep incline that differentiates the Allegheny Mountains to the east and the Allegheny Plateau to the west. My warmshowers host, Deb, was already up with the morning edition of the Altoona Mirror, which included the article about my cross-country trip!

Feeling famous, I rolled out of town, past Reighard’s, America’s oldest gas station, in operation since 1909. I began to climb and passed several reservoirs. Altoona has a huge water supply system, the legacy of being a locomotive manufacturing center and the primary place where steam engines were ‘refueled’. If they can find a way to send their excess water to California, it might help both regions. 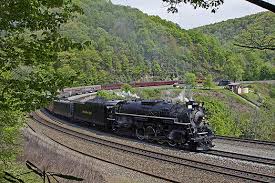 I started the long ascent up to Horseshoe Curve, where the railroad tracks form a tight ‘U’ against the mountain. Unlike most cities, Altoona is not built along a river. It was founded as a staging point to build the railroad across the Alleghany Ridge, and the most impressive achievement is Horseshoe Curve, which opened in 1854. I got there shortly after seven and was able to watch a long train navigate the graceful arc. Then I pedaled the much steeper road to the top of the ridge, an arduous combination of New England incline and Pennsylvania length.

Once I reached the ridge, I had twenty easy miles, though I was never far from a train. The roads followed the crenulated terrain, while the sinuous lines of steel ran mostly out of sight. Whistles and brakes screeched out of the woods as frequent as birdsong. Every few miles the blacktop weaved under the tracks through a narrow tunnel.

The day was grey with occasional sprinkles, which made hillsides towns like Gallitzin and South Fork look as dreary as The Deer Hunter, which was set in this part of Pennsylvania. I had another long climb approaching Johnstown, and then the steepest descent of my trip yet – white knuckle braking on a 14% grade right into downtown. I landed in town just after 11 a.m., which was good because the sprinkles turned into a steady rain. Fortunately, my most challenging riding of the day was behind me.

The sky cleared and I had an afternoon meeting with Bob Layo, Executive Director of the Johnstown Chamber of Commerce, to talk about tomorrow in a town of declining population and opportunity. Afterwards I enjoyed a late lunch at the 24-hour luncheonette, Coney Island: a hot dog, slathered in mustard, chili and sauerkraut; a sundowner, hamburger with chili, cheese and a fried egg; and a signature cookie stuffed with raisins. Total bill: $6.10. Then I rode around downtown and stopped by George’s Song Shop, the oldest record store in America (1932) to ask George about tomorrow.

A Johnstown joke: What has six arms, six legs, and six teeth?

Answer: The graveyard shift at the Coney Island.

Greetings reader. I am a writer, architect, cyclist and father from Cambridge, MA. My primary blog, theawkwardpose.com is an archive of all my published writing. The title refers to a sequence of three yoga positions that increase focus and build strength by shifting the body’s center of gravity. The objective is balance without stability. My writing addresses opposing tension in our world, and my attempt to find balance through understanding that opposition. During 2015-2106 I am cycling through all 48 mainland United States and asking the question "How will we live tomorrow?" That journey is chronicled in a dedicated blog, www.howwillwelivetomorrw.com, that includes personal writing related to my adventure as well as others' responses to my question. Thank you for visiting.
View all posts by paulefallon →
This entry was posted in Bicycle Trip Log and tagged Altoona Mirror, Altoona PA, Bob Layo, Coney Island Johnstown, George's Song Shop, Horseshoe Curve, Johnstown PA, Reighard's. Bookmark the permalink.