Cyclists love Ohio and Ohioans love cyclists. The state has the most extensive system of rail-to-bike trails in the country, and people view us as welcome tourists rather than nuisances. Although my route today didn’t include any bike trails, people gave me wide berth, trucks slowed if necessary, and nobody honked, except for a few oncoming toots by people who wanted to wave rather than rant.

My warmshowers host Bill sent my on my way by 7:00 a.m. with a toasted egg sandwich and banana in my belly and an heirloom apple for the road. He was apologetic that the first eight miles of my ride was through a big box strip, but I accept them as an unfortunate but integral part of the United States. Our country has twice the amount of retail square feet per person than any other nation in the world – all of those aisles of stuff have to go somewhere. 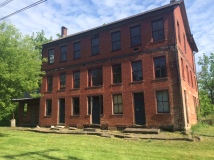 Despite my good breakfast I felt peckish, so stopped at a market for a donut and stocked up on power bars. By the time I reached Canfield the road became tranquil, and when I tuned off on Route 45 the ride turned pastoral. I ate the most delicious apple I’ve ever tasted and began thirty pleasant miles along Route 18, parallel to I-76.

A sign for Kiko Auction caught my eye, so I detoured to witness the scene. Pick-up trucks lined both sides of the residential street. Colleen ran a food concession with cold pop and hot sausages. Michelle, who must be very short, staffed the registration booth from the back of a van. She explained that today’s auction was tools and basement items. Future auctions would liquidate the household items and finally, they’d sell this retiree’s house. It was a solid house in a good neighborhood, definitely not a distress sale. I asked why someone would auction their stuff rather than sell it though ads. “We’ve been in this business for seventy years, my grandfather found it. People find is easier to go to auction. We have a lot of success stories, especially among retirees.” The auction start time was almost two hours away, but Michelle had a steady stream of guys – all guys – registering to bid. She knew most of them by name, and Colleen ran a tab for a good number of them as well: traders looking for a deal.

Sometimes I feel this trip is as much about ‘stuff’ as it is about people. We have so much, and so much of our energy is invested in making, moving, buying, using, trading, selling, and throwing it all away.

On my bike, my cravings run to food rather than possessions, and today I could not get enough. I stopped under a nice tree to devour an energy bar, and was still hungry when I came upon a young man stabbing the ‘Open’ banner in the ground in front of Angelo’s Pizza in Rootstown. It was just 11, but I stopped to enjoy a chicken parmesan sub, cole slaw, and Jojo’s, which are steak fries on steroids. Brian explained that the fryer was still warming up, so I talked to his father Woodie while I waited for really fresh, crisp fried goodness. “Where’s Angelo?” Woodie laughed. “There is no Angelo. We bought the place with that name and just kept it.” I stayed an hour while Brian set up the kitchen, Woodie’s wife ran deliveries and Woodie asked me about my trip. The food was amazing. When I went to pay, Brian nodded toward his dad, “He said no charge.” 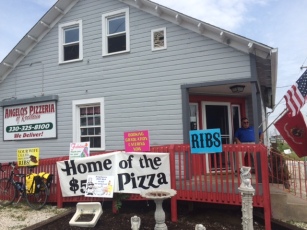 I rode the last twenty miles to Akron, finally satiated and grateful for the random acts of kindness that I find all about me.

I arrived at Mr. Bob’s House, the National Historic Landmark home of Dr. Robert Smith, one of the founders of AA, before two and got a personal tour from an inspiring volunteer guide. Then I met my Haiti friend Kim Conrad at a coffee shop, where I hung around for a few hours after she left soaking in the Akron vibe before heading to my motel for the night.

Greetings reader. I am a writer, architect, cyclist and father from Cambridge, MA. My primary blog, theawkwardpose.com is an archive of all my published writing. The title refers to a sequence of three yoga positions that increase focus and build strength by shifting the body’s center of gravity. The objective is balance without stability. My writing addresses opposing tension in our world, and my attempt to find balance through understanding that opposition. During 2015-2106 I am cycling through all 48 mainland United States and asking the question "How will we live tomorrow?" That journey is chronicled in a dedicated blog, www.howwillwelivetomorrw.com, that includes personal writing related to my adventure as well as others' responses to my question. Thank you for visiting.
View all posts by paulefallon →
This entry was posted in Bicycle Trip Log and tagged Akron OH, Angelo's Pizzeria, bicycling, cycling, Dr. Bob's House, Kiko Auctions. Bookmark the permalink.