David Gibson and I are fraternity brothers, though we hadn’t seen each other in over thirty years. During that time he served five years in the U.S. Army in East Germany before the wall fell, went to business school, worked for Corning Glass, started his own company producing specialty radiographic lens, built it into a industry leader, and sold it two years ago. He’s searching for the next act in his life, though he’s not at liberty to join my cycling adventure since David and his wife Chris have four-year-old twins, in addition to eight other children and several grandchildren from earlier marriages and adoption. Chris and David are devout Mormons, and their commitment to family is evident everywhere in their large house where they can accommodate any and all extended family.

Chris, David, three of their children, and I enjoyed a barbeque on the deck overlooking their forty acres of woods on a Saturday evening. During dinner, David asked each in turn “How we will live tomorrow?” 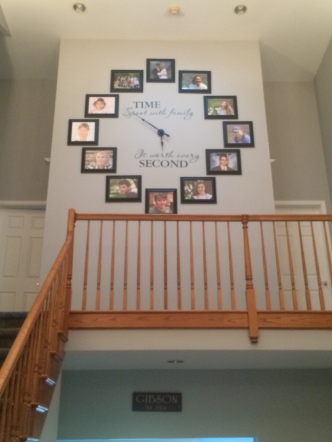 Bryson, a fifteen-year-old high school student said: “Technological advances will control what happens. It will be better in a lot of ways, but if you’re stuck in the past, no.”

Christine responded: “I have two thoughts. My optimistic view is that medical advances are coming rapidly. Things that our parents suffered, and our grandparents died from, won’t even be on our children’s radar screen. My fear is that the number of restrictive laws passed because one kid in one place got injured will continue to grow. We’ll sap our spontaneity and energy because we contain our actions to protect against people who did stupid stuff. Life is not going to get happier with all of these restrictions.”

Later in the evening, when Bryson was playing video games, he chimed in with another response that is both prescient and intriguing: “We are going to download our consciousness and live forever.”

The next morning, Chris came into the playroom where Austin and I were deep in Legos, and told her son it was time to put on his shoes to get ready for church. “But mom! You said, how will we live tomorrow?” Chris and I laughed, but I appreciated how the little boy took my question to a whole different level – his answer to play all day as not just hopeful, but defining.

Nevertheless, Austin put his shoes on, and we all attended the LDS church service in Latham, NY. Since people of faith are focused on tomorrow, I’m interested in attending a variety of services during my trip. It seemed particularly appropriate to attend a Mormon service while in upstate New York, where so many American religious and utopian groups, including the Mormons, were founded in the nineteenth century.

This Sunday the focus of the service was on Mormon prophets and how they guide individual behavior. Mormons have a lay ministry, and two members of the congregation gave the inspirational talks. Dara Blanchette told a story of having a third ear piercing and then hearing the prophet’s advice to wear only two earrings. She decided to let that piercing close over. “In a world that has grown more chaotic, it is our role to be models of grace and refinement.” Austin Peterson, an IT guy, said, “When I go to Google with a question, I get a discussion board with a variety of answers and opinions. Having a prophet is like having a search engine run by God. The answers may not be popular, but they are definitive.”

Two things struck me about the service. First, that this religion is both real and relevant. Although it references ancient texts like the Bible, The Book of Mormon is much newer, at least in its translation. The prophets are actual men, alive today, and not the historical figures that define most traditional Christianity. The mash-up of ancient history, recent history and present-day direction make the church seem alive. Second, this religion provides a lot of answers. It must be comforting to many to believe in something so comprehensive and definitive. From an LDS perspective, tomorrow seems both positive and manageable.

In addition to hosting me, David provided this written response to my question

With the number of people in the middle class growing from 1.8 billion in 2009 to a projected 3.2 billion in 2020 and 4.9 billion in 2030 (http://www.oecdobserver.org/news/fullstory.php/aid/3681/An_emerging_middle_class.html) the strains on the World’s material resources will be forced to the forefront. We (the larger, world “we”) cannot all live like Americans have been used to. Unfortunately through the ubiquity of American media that high level of consumption, and even the portrayal of a false higher level as standard, a desire and expectation in much of the world.

But I have considerable hope. In the US there seems to be a growing and persistent move towards not needing to own as much. This is evidenced in the growth of the sharing economy including companies like Airbnb, Uber, Lyft, SnapGoods, Getaround, Neighborgoods, and theDressList. It can also be seen in the very rapid growth of makerspaces, the adoption of temporary digital-book distribution, and to me the unexpected disinterest of many youth in getting a driver’s license as soon as they are eligible.

I hope we can become conscious of the difference between needs and desires. And over time our desires not be so material based.

There is a long way to go. But it seems a good start.

Greetings reader. I am a writer, architect, cyclist and father from Cambridge, MA. My primary blog, theawkwardpose.com is an archive of all my published writing. The title refers to a sequence of three yoga positions that increase focus and build strength by shifting the body’s center of gravity. The objective is balance without stability. My writing addresses opposing tension in our world, and my attempt to find balance through understanding that opposition. During 2015-2106 I am cycling through all 48 mainland United States and asking the question "How will we live tomorrow?" That journey is chronicled in a dedicated blog, www.howwillwelivetomorrw.com, that includes personal writing related to my adventure as well as others' responses to my question. Thank you for visiting.
View all posts by paulefallon →
This entry was posted in Responses and tagged David GIbson, LDS, Mormon. Bookmark the permalink.