The Oneida Community was by many measures the most successful of all the nineteenth century Utopian communities. John Noyes and his followers were chased out of Putney, VT due to their beliefs in sharing not only work, lodging, and resources, but also marriage. The Perfectionists, as they called themselves, arrived in New York State’s ‘Burned-over District’ of revival fervor, and established the Oneida Community. Between 1848 and 1880 they built the Oneida Community Mansion House, established a thriving silverware manufactory, and grew to several hundred members. Like many Utopian communities, they were unable to survive the death of their founder, though Oneida Limited was established as the resulting business in 1880 and thrived for over one hundred years.

A non-profit organization was formed in 1987 to acquire the site from Oneida Ltd to oversee the historically significant Oneida Community Mansion House and with the company’s help, established an endowment early on. I met with Patricia Hoffman, Oneida Community Mansion House Executive Director, to learn about the community and the lessons it offers about how we will live tomorrow.

Ms.Hoffman explained that sites like this are experiencing a decline in the numbers of visitors, changing demographics, the impact of technology and for the last several years, a general decline in the economy.  It is fortunate that the Mansion House contains residential apartments, overnight lodging, and banquet and meeting space to offset less than robust museum revenues.  To ensure the site remains relevant into the future, the fifteen-member board of trustees recently voted to focus on becoming an educational resource for historic preservation.  Ms. Hoffman sees this as a logical extension of the Oneida Community ideal of changing directions whenever necessary to keep moving forward. 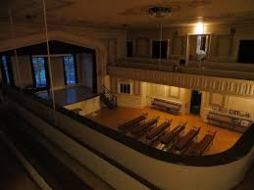 The shared economic and religious endeavors of the original community are gone; the current residents don’t have any formal cooperative arrangement. However, the boundaries between the shared spaces and private spaces are blurred, and Ms. Hoffman believes, “The energy from when the community was here permeates everything. Those values pass through generations.”

What can we learn from Oneida Community about ‘How will we live tomorrow?’

“One of the most important legacies of the Oneida Community was the creation and development of Oneida Community Ltd. which went on to become Oneida Ltd., one of the first social welfare companies in America.” Oneida Limited offered health care, stock ownership, and other ways for employees to be actively engaged in the company well before others. In the early 1900’s the company was expanding. They subdivided their land to create plots for workers to build houses. They built schools, parks, even the first company golf course in America. But Oneida was never a company town, like Pullman or Bethlehem. In the 1920’s the executives took pay cuts to avoid laying off workers. “They were trying to make money, but never at the expense of the employees, ever.”

Greetings reader. I am a writer, architect, cyclist and father from Cambridge, MA. My primary blog, theawkwardpose.com is an archive of all my published writing. The title refers to a sequence of three yoga positions that increase focus and build strength by shifting the body’s center of gravity. The objective is balance without stability. My writing addresses opposing tension in our world, and my attempt to find balance through understanding that opposition. During 2015-2106 I am cycling through all 48 mainland United States and asking the question "How will we live tomorrow?" That journey is chronicled in a dedicated blog, www.howwillwelivetomorrw.com, that includes personal writing related to my adventure as well as others' responses to my question. Thank you for visiting.
View all posts by paulefallon →
This entry was posted in Responses and tagged Oneida Community, Oneida Community Mansion House, Oneida NY. Bookmark the permalink.