Corning, NY, the Crystal City, is home of Corning Glass. Founded in Brooklyn as Brooklyn Flint Glassworks in 1851, the company moved to Corning in 1868 to be nearer to the Pennsylvania coal needed to fuel the furnaces, raw materials needed for glass, and inexpensive Italian labor. It changed its name too reflect its new location. Corning became a leader in developing consumer products, including Pyrex, Corning Ware, and Corelle. In 1951, the company’s 100th anniversary, Corning established the Museum of Glass as an independent non-profit. Corning has always stressed new product development; 10% of its budget is earmarked for R&D. In the last half of the twentieth century, Corning’s focus moved away from domestic glass products toward fiber optics and specialty glass. In 1996 they sold off all their domestic glass production, though their most famous products still bear their name. Now Corning manufactures the ‘keystone’ glass components many products. Just as Corning manufactured the first glass for Edison’s light bulbs, it now produces the ultra-thin, tactile glass screen on our smart phones and wide screen TV’s and more than half the fiber optic cable in the world.

I met with Yvette Sterbenk, Director of Communications; and Glen Cook, Chief Scientist of the Corning Museum of Glass; to discuss how will we live tomorrow. Glen worked for Corning Inc. for sixteen years and spearheaded fourteen patents before transitioning to work full time at the museum. “Every panel display in the world has a piece of my invented DNA in it.” Glen values the interaction between the corporate side of glass research and development, and the artistic side celebrated in the museum. Gaffers (people who make glass by hand or blowing) can inform machine fabrication, and vice versa. “No machine invented can do what the human mind and hand can do, while gaffers are often unaware of the fundamental science behind what they do.” Glen’s role is to bridge the intuitive feel of glassmakers with scientific understanding. “Gaffers say that glass is alive; a Pele goddess of sand and lava. That’s true, but there’s also science behind it.” Glen is well suited to his connective role as scientist in an institution of art. “Glass doesn’t do anything it doesn’t want to do, but it can be coaxed. The relationship between a gaffer and the glass is like a conversation between a garden and the gardener, or a chef and his food.” He describes how Corning Museum of Glass supports artists for long-term internships to live in Corning, develop art, and interface with Corning’s R&D folks. “The museum used to be about the archeology of glass, now we are about the possibility of glass.” 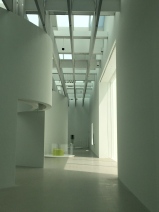 “I had a conversation with a geologist today, talking about the arrow of time. The future stands in the shadow of the past.” Glen brings out two glass samples. One is piece of 3”x5” glass circa 1780, the kind that filled colonial windows, and which we value now for its handmade quality. The second is fusion process glass, circa 2000. It is so flat and smooth; if the sample were expanded over the area of a football field its thickness would vary less than the width of a pencil lead. It is a distortion-free surface far beyond what the eye can discern.

Why did it take 200 years to make this difference in precision? “The speed of technological change is driven by need. Corning developed the fusion process in the 1960’s, but there was no perceived need for glass that smooth. The Patent Office is filled with inventions that will never be used. There has to be a ‘pull’ as well as a ‘push.’ We could all fly around on jet packs now, we have been to the moon, but they are not everyday experiences because there is no demand.”

Glen expands his ideas beyond science. “We have the ability to feed everyone on earth, but we don’t have the collective will. Our science is spot on, but what will motivate us to apply to the common good of all?” 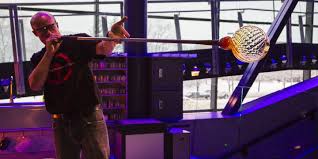 “I can say with surety that tomorrow will be more advanced technology, more precision, and more potential. Modern technology is driven by precision, but I don’t know what people will want, which determines which advances we use.” 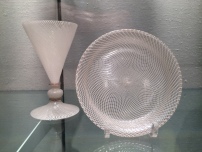 Yvette observed, “People come to the Corning Museum of Glass to the see the stuff from the 1760’s; the local, imperfect, hand drawn materials elicit the deepest responses. We seek the human touch.”

Glen continued, “Our humanity lies in what we know. You can’t know where you’re going unless you know where you’ve been. In the end, everything is made of rocks and wood. Everything. We are just hyper intelligent bonobos throwing rocks at each other. We still live as our species did 30,000 years ago, playing with animal, vegetable, and mineral.”

Greetings reader. I am a writer, architect, cyclist and father from Cambridge, MA. My primary blog, theawkwardpose.com is an archive of all my published writing. The title refers to a sequence of three yoga positions that increase focus and build strength by shifting the body’s center of gravity. The objective is balance without stability. My writing addresses opposing tension in our world, and my attempt to find balance through understanding that opposition. During 2015-2106 I am cycling through all 48 mainland United States and asking the question "How will we live tomorrow?" That journey is chronicled in a dedicated blog, www.howwillwelivetomorrw.com, that includes personal writing related to my adventure as well as others' responses to my question. Thank you for visiting.
View all posts by paulefallon →
This entry was posted in Responses and tagged Corning Museum of Glass, Corning NY, GLen Coook, Yvette Sterbenk. Bookmark the permalink.