I heard that the Racine Police Department had an innovative community policing program, so a few days before arriving in the city of 81,000 along Lake Michigan I sent an email request through their website asking to meet. I wasn’t surprised when I heard nothing in return. Then, the morning I entered Wisconsin I received a voice message from Lt. Dave Wohlgemuth asking me what time I would be available to meet. Excited, I called right back and set up a meeting time. When I pedaled up Jacato Drive I found the small house with the Community Policing House (CPH) sign opposite a row of apartment buildings undergoing extensive renovation. Inside, Lt. Dave introduced me to five other officers, including the Chief of Police Art Howell; Retired Chief of Police Richard Polzin, founder of Racine’s Community Oriented Policing program (COP); Deputy Chief John Polzin; Lt. Al Days; and Officer Sarah Zupke, the current COP Officer assigned to the Jacato House.

It took more than a moment to absorb the number and rank of officers who came out to talk with an itinerant cyclist on a Wednesday afternoon, but once I got my bearings I appreciated the range and depth of our conversation.

Chief Howell began by providing context. In the early 1990’s Racine, caught in the drug traffic between Chicago and Milwaukee, had the highest crime rate in Wisconsin. The local paper highlighted this in a special report, ‘Fortress Racine’. Jacato Street was one of the worst hotspots, where drug dealers controlled the row of apartment buildings. Former Chief Polzin realized that business as usual was not working, so set about to find alternative ways to address the situation.

Chief Polzin provided additional background. He learned about the basics of community policing at national conferences, and decided to apply them in a specific way in Racine. Like most cities, Racine Police worked in pairs and operated out of cars with little direct relationship between individual officers and members of the community. They started holding neighborhood meetings in high crime areas, often in the form of block parties. Then, they purchased a duplex in one neighborhood and a storefront in another. They assigned one officer to staff it Monday through Friday during business hours. “It’s not a Precinct House; it’s a community house, a place in the community where there is a regular police presence.

“The night before the first COP house opened, a local gang shot seven bullets through the front door. We moved in anyway. We started walking the neighborhood, talking with people. Helping them get inspections, making it clear the city and the police had not abandoned them. The key is finding the right location. You have to be right next to the gangs. A block away is too far.”

The Officers who staff the local houses are part of the Racine Police Department, but the COP houses and their activities are funded through a non-profit organization, not the city. This provides more latitude in what they can support, and allows them to respond to needs quicker. “If we had to requisition through the city for Halloween candy, we wouldn’t get it approved on time.”

The houses evolve into de facto community centers for challenged neighborhoods. Parole officers work out of several of them, some are after-school hang-outs. There is a conscious focus on youth, to create positive relationships in the years before crime patterns emerge.

I asked Chief Howell if buy-in from the police officers has been difficult. He replied that it was, at first, until the officers realized the program benefits them as well as the community. “Better relationships with the community lead to better information, more trust, and greater safety on both sides. We had an officer shooting incident last year, but we didn’t see the kind of community response that other cites have witnessed because we had twenty years of trust equity to avoid inflaming the situation.” Regular patrol officers have learned to rely on the COP officers as additional resources, mini-Chiefs who know their area very well. Not only do the COP officers assist in calls, they also diffuse a lot of situations so that many calls never happen. “It was difficult for officers to see the Chief’s vision back in the 1990’s. Now that we see what’s happened in Ferguson and Baltimore, we get it.”

Former Chief Polzin added, “We have to remember history. Back then, officer safety was a big issue. Third shift officers wore helmets. Everyone knew the situation was not stable.”

Lt, Dave added, “I’ve never been a COP officer, but I can see how COP has become our department philosophy. We rely on COP officers in our planning; they have access to information that we don’t know downtown.”

Al added, “I started out in the DARE program in schools and realized that Trust, Respect and Engagement are the key. That’s why the COP approach to policing makes sense to me. You have to give all three to get all three. I was born and raised in Racine. I was shot at in my neighborhood when I was younger, then I was a COP officer in the same neighborhood.”

Chief Howell explained, “We make arrests and enforce the law by force when we have to, but our objective is to intervene before that happens. Twenty years ago we started Cops and Kids Fishing. Now, those kids are adults and they are not shooting at us. We formed a positive bond and relationship that helps us cull the bad stuff and plant new stuff.”

There are Community Policing Houses in six Racine Neighborhoods. The Police Department evaluates their success in a variety of ways:

2, Economic Development. Walgreen’s recently built a store next to the first Community Policing House; another neighborhood got a grocery store. Several neighborhoods have had new ho 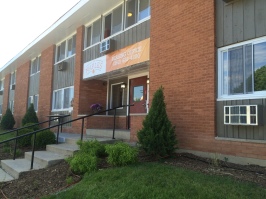 me construction, and the apartment buildings on Jacato Street have been gutted and are being renovated into market rate rental apartments.

Chief Howell is proud of the accomplishments begun under his predecessor and continued for over twenty years. But he realizes that they cannot rest on their success. “We have a fifty year low in serious crime, but we cannot celebrate, we are never done.”

“What we are doing here is exactly how it needs to be.”

Greetings reader. I am a writer, architect, cyclist and father from Cambridge, MA. My primary blog, theawkwardpose.com is an archive of all my published writing. The title refers to a sequence of three yoga positions that increase focus and build strength by shifting the body’s center of gravity. The objective is balance without stability. My writing addresses opposing tension in our world, and my attempt to find balance through understanding that opposition. During 2015-2106 I am cycling through all 48 mainland United States and asking the question "How will we live tomorrow?" That journey is chronicled in a dedicated blog, www.howwillwelivetomorrw.com, that includes personal writing related to my adventure as well as others' responses to my question. Thank you for visiting.
View all posts by paulefallon →
This entry was posted in Responses and tagged Community Policing, Jacato Drive Community Policing House, Racine Police, Racine WI. Bookmark the permalink.