People are spread pretty thin in North Dakota, including Guinn Hinman. Guinn manages 26 historic sites in the northern half of the state. Some are seasonal; many aren’t staffed at all. Guinn lives in Cooperstown in summer and is based at Bismarck’s Heritage Center in the winter. One of her biggest attractions is Oscar-Zero, a decommissioned Minuteman Missile Alert facility. Every summer 5000 people trek to the windy grassland four miles north of town to visit this Cold War artifact, but on the Monday morning I arrived, I was the lone visitor. 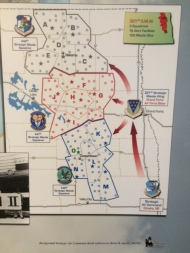 Between 1962 and 1964 the United States built six wings of Minutemen Missile facilities. Each wing contained fifteen alert facilities; each alert facility controlled ten missile launch sites, dispersed across miles. That’s 900 missiles total; each with more firepower than humans threw at each other in all of World War I; 27 times more powerful than the bomb that destroyed Hiroshima. North Dakota was the only state with two wings. The wing staffed from the Grand Forks Air Force base was shuttered when the 1994 START Treaty cut our Minuteman capability in half; the wing operating out of Minot is still in existence. Oscar-Zero remains as it existed when decommissioned in 1997. Guinn’s visited active alert facilities, and attests that Oscar Zero is identical to the ones active today.

North Dakota in 2015 is buzzing with economic energy from the oil and gas boom. A similar boom occurred in the early 1960’s, when our government built three hundred silos and thirty alert facilities here in less than two years. Like the energy boom, most of the effort was underground. All one can see of missile silos are concrete pads set off the road with chain link fences. Alert facilities are unassuming wood frame buildings. When decommissioned, the underground vaults were filled with concrete, the surface structures sold off. Except for Oscar-Zero, which the State obtained in 2009 to create a museum. Less than twenty years after closing, Oscar-Zero seems both amazing and primitive.

A bit of logistics. Ten men staffed each alert facility at all times. Two Air Force officers occupied the underground missile control room. Eight Air Force staff remained above: a facility manager, a cook, plus two, three person security teams. The officers worked twenty-four hours underground, and then had seventy-two hours back in Grand Forks. The above ground team worked three days on, three days off. The manager ran operations. The cook was second in command and staffed the convection oven food packets (“A meal plan for men designed by men,” according to Guinn) One security team remained on site and traded off staffing the front desk that overlooked the entrance gate (with a shot gun at his side). The other security team was in the field monitoring their ten designated silos. The only person who stayed at one alert facility was the manger; everyone else rotated among the fifteen facilities in the wing. Each facility was identical, their staff interchangeable.

Quinn has a Masters Degree in Museum Management, yet Oscar-Zero is an odd museum. It represents an era I lived through. Nothing looks old. It’s hard to consider a Frisbee or Boggle game an artifact, or the generic blue upholstered chairs or metal bunk beds. However, the place does appear frozen in time.

A security door near the living quarters leads to 9000-pound capacity freight elevator. Guinn took me fifty feet down. “They excavated an area the size of a football field, 60 feet deep, to build the underground portion of each alert facility.” At the base are two egg-shaped concrete containers. The elevator shaft is not blast-proof. Huge steel doors that make bank vaults look skimpy flank the elevator. A fourteen-ton equipment door leads to Launch Controls Equipment (LCE), a room full of mechanical devices that Guinn describes as the heart of the operation. A smaller human door, just as thick, leads to the Launch Controls Center (LCC), where the two officers resided during their shift. Guinn calls LCC the brain. I’m struck by the Cold War logic that humans are the brain while machines the heart. These days, we would probably reverse those designations.

Guinn is well versed in the procedures and safeguards of the Minuteman missile system. Each twelve-hour shift began with a check of the LCE. Then the oncoming officers locked themselves into the LCC, which can only be opened from within. The LCC was never vacant. Within the LCC are two desks, a bank of computers and a small cot. One officer always staffed the Deputy Chief Desk, which showed the status of Oscar-Zero’s ten missiles. The Commander’s desk, used for communications among alert facilities, was occupied intermittently. 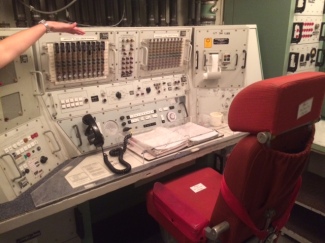 If the officers received a code for action, they each used their personal designation code to open a red box. Inside the box was the code decipher. If the code was to activate a missile, they inserted separate keys into locks remote from each other and turned them simultaneously. One man could not launch a missile. In an actual launch, anther set of officers at another alert facility would do the same thing. The officers underground did not know which missiles they were launching, how many, or where they were going; that was determined by Strategic Air Command in Omaha. Although each alert facility monitored ten missiles, launching capabilities were interconnected. Up to fifty missiles could be launched from any alert facility. The place is littered with switches and buttons, panels and dials, but, as Guinn says, “Now, all the communications capability of the LCC can fit into an iPhone.” 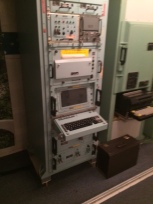 When the Grand Forks wing of the Minuteman Missile System closed, the local economy took a hit. The silos were powered by local utilities with generator backup. They used so much power than when they closed a local utility went out of business. Guinn hopes that the current boom doesn’t end so dramatically. “I hope the boom lands gently. It’s hard to compete when MacDonald’s is paying $20 an hour. Right now, things are more sane then they were few years ago. For the first time in five years, my Williston site is fully staffed.” 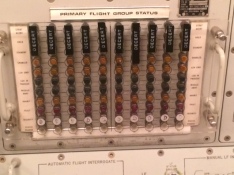 Oscar-Zero reminded me of a set for the TV show ‘Get Smart’, until I realized that there are thirty other alert facilities around the country where this exact equipment and set of procedures are still in active use. They are still operating on high alert more than fifty years after they opened, though they have never once been used. “This was the front line of the Cold War, a war that we won without firing a shot. It’s an odd way to measure success.” 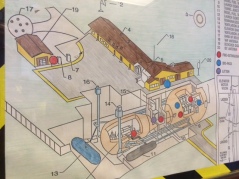 I’m fascinated by Oscar-Zero as a museum, but anxious about our active facilities. Why do we put so much faith in antiquated equipment that’s difficult to test, repair or replace? How can humans remain on ‘high alert’ for over fifty years and never actually do anything? Do the men in Minot still go underground for twelve hours a day keen to the idea that a nuclear attack is imminent? They have to, to believe in what they’re doing.

“Hopefully greener. We have to change the way we’re living, to leave more for our children. Yet in North Dakota in particular, these small towns that are dying. I’m concerned for the future of North Dakota history.

“I hope we will live without nuclear missiles, but I doubt it.”

Greetings reader. I am a writer, architect, cyclist and father from Cambridge, MA. My primary blog, theawkwardpose.com is an archive of all my published writing. The title refers to a sequence of three yoga positions that increase focus and build strength by shifting the body’s center of gravity. The objective is balance without stability. My writing addresses opposing tension in our world, and my attempt to find balance through understanding that opposition. During 2015-2106 I am cycling through all 48 mainland United States and asking the question "How will we live tomorrow?" That journey is chronicled in a dedicated blog, www.howwillwelivetomorrw.com, that includes personal writing related to my adventure as well as others' responses to my question. Thank you for visiting.
View all posts by paulefallon →
This entry was posted in Responses and tagged Cooperstown ND, Grand Forks Air Force Base, Guinn Hinson, Oscar-Zero, Ronald Reagan Minuteman Missile Site.. Bookmark the permalink.