When the Mormons fled to the West, they founded Utah. In short order they also settled areas north and south of the Wasatch Range. Their influence spreads throughout eastern Idaho and into northern Arizona. It seemed fitting that as I came toward the limit of their influence I met a man raised Mormon who grappled with his faith and ultimately decided he did not believe. To cease being a Latter-day Saint is a momentous decision.

Sam Hancock grew up one of seven children in the tiny town of Ucon, ten miles outside of Idaho Falls. At age 20, when many young Mormon men go on their mission, Sam fell away from the church. But he stayed near his family and in the past ten years has found equilibrium as a non-believer within the dominant culture.

Sam supports the recent Supreme Court decision to allow same sex couples to marry. “That decision is a big deal among Mormons. The LDS put out a statement that man-woman relationships are the only approved relationships.” Yet, in many ways he adheres to the Mormon emphasis on independent living. He worked for a few years as a truck driver and bought a modest house for $50,000 in a neighborhood that has seen better days. He lives mortgage free with a Mormon housemate, works as a freelance IT troubleshooter, drives his grandfather’s pick-up, and maintain s a simple life. His big endeavor in this moment is building a tree house in the massive tree that shades his yard. 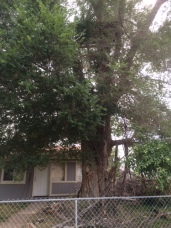 “I want to take as few resources as I can and leave no footprints. As long as I’m not married or have children, I only have to work two to three months a year. Living here is cheap. The pick-up runs on propane, which is $1.30 a gallon. Insurance costs $17 a month. Utilities are cheap in Idaho Falls. The city owns the hydro plant. We pay a flat $20 a month. All my expenses are about $600 a month – everything. 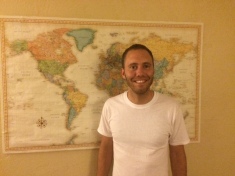 “I remember asking my grandfather when I was a kid, ‘What would the future be?’ He lived on a farm, growing potatoes. He thought things would always be the same. I don’t see it that way because in my thirty years there is change every year. The future will not be like today.

“I think people in Idaho are better at ‘Provident living’, which the Mormon Church espouses, than our neighbors in Utah. Utah has become a place where status matters.”

Greetings reader. I am a writer, architect, cyclist and father from Cambridge, MA. My primary blog, theawkwardpose.com is an archive of all my published writing. The title refers to a sequence of three yoga positions that increase focus and build strength by shifting the body’s center of gravity. The objective is balance without stability. My writing addresses opposing tension in our world, and my attempt to find balance through understanding that opposition. During 2015-2106 I am cycling through all 48 mainland United States and asking the question "How will we live tomorrow?" That journey is chronicled in a dedicated blog, www.howwillwelivetomorrw.com, that includes personal writing related to my adventure as well as others' responses to my question. Thank you for visiting.
View all posts by paulefallon →
This entry was posted in Responses and tagged cheap energy, conservation, Mormon, Pocatello ID, Sam Hancock. Bookmark the permalink.