Tim Holmes is the only person I’ve taken money from on this trip. One blue dollar. I tried to turn it down, but he wouldn’t let me. “It’s real US currency. We aren’t allowed to deface our money. This isn’t defaced. It’s just blue. You can still read everything on it. You can still see the watermarks.” Tim creates blue money and distributes it with a story. “Wealth is created by nature and human creativity. Money represents wealth, but so much of our wealth is tainted. Blue bills are based on a clean world; they’re used for clean purposes. When you accept a blue bill, you acknowledge that you’ll use it for clean purposes. When you give it someone, they accept the bill with that understanding.” 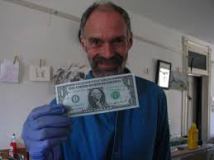 I took the dollar. A few days later, I gave it to a waitress in Ovando and explained its meaning. She seemed to understand. No other blue bills have crossed my path. But Tim’s blue bill made me conscious of whom I gave it to and why. I remember that waitress above all others because I chose to give her my blue bill. The blue bill was a dollar. But because it made me see money differently, it was also art.

In many ways, Tim is a conventional artist. He’s created thousands of beautiful drawings and shapes evocative sculptures. He’s also had a good share of artistic fame. Tim Holmes was the first American artist to be exhibited at The Hermitage in St. Petersburg, Russia. He created the statuette that the United Nations gives to its ‘Woman of the Year.’ He’s worked with Jimmy Carter and Archbishop Desmond Tutu. His art is on display all over the world. Which frees him from pursuing fame. “I don’t have a PR machine anymore. I had success early in my career; that success enables my obscurity. Now I can work for my muse.”

Tim showed me a recent sculpture, inspired by the Fujiyama disaster. Two metal figures are connected at their feet. They can be twisted and turned in over 40 variations, yet they never quite stand on their own. “I look at a situation and try to illuminate it from the inside out. I want to come with a compelling question that the viewer cannot let go.”

Although Tim’s artistic success came through drawing and sculpture, he’s always been a multifaceted artist. Tim’s father was the Pastor of St. Paul’s Methodist Church in Helena. His sister Krys is Director of the Myrna Loy Center, his brother Steve is an artist in Massachusetts. “I come from an accomplished, remarkable family, all working for a better world.” Tim and Steve were half of the Montana Logging and Ballet Company, a political satire and musical group, for over twenty-five years. My Helena warmshowers host played their CD, which is gorgeous stuff.

Beyond making and distributing blue bills, Tim is excited about another non-traditional art project, one that dovetails with my own quest to question people. Tim provides drawings to his friend Garrett Garrels, who gives them to individuals he meets in his journeys. The two collaborated on a book, Random Gifts of Art, a collection of Tim’s drawings and Garrett’s stories of giving them away. They distribute the book for free and ask people to pass it along.

Tim and Garrett are looking for ways to expand on their random gifts of art project by creating a performance piece to tour around the world. They want to move beyond thinking of art as a precious commodity. “The point is to spark creative generosity; to create an avenue of generosity within a capitalist system.”

“I have books on that.

“We have to design a future that will serve us all. If we use our imagination we can create a world that works for everybody. We can’t just do what we’ve been doing. So the next time we build a nuclear plant, if we do, we understand the parameters that nature will subsume human plans.”

Greetings reader. I am a writer, architect, cyclist and father from Cambridge, MA. My primary blog, theawkwardpose.com is an archive of all my published writing. The title refers to a sequence of three yoga positions that increase focus and build strength by shifting the body’s center of gravity. The objective is balance without stability. My writing addresses opposing tension in our world, and my attempt to find balance through understanding that opposition. During 2015-2106 I am cycling through all 48 mainland United States and asking the question "How will we live tomorrow?" That journey is chronicled in a dedicated blog, www.howwillwelivetomorrw.com, that includes personal writing related to my adventure as well as others' responses to my question. Thank you for visiting.
View all posts by paulefallon →
This entry was posted in Responses and tagged Garrett Garrels, Helena MT, Montana Logging and Ballet Company, Random Gifts of Art, Tim Holmes. Bookmark the permalink.