Ethel MacDonald leaned forward in her chair, extended her frail arms wide and proclaimed, “I hear people say, ‘so and so is a good family man’. That is all well and good, but it is not enough. The community I am concerned about is the whole world.” It was nearly midnight; her voice was strong. I was certain that Ethel could debate politics and economics for several more hours, but I’d been up since dawn and needed to sleep. I was no match for my 76-year-old host.

Ethel married a smokejumper and raised three sons, got divorced 36 years ago, taught English and French in Missoula, and then in Benin. One of her sons is a Microsoft executive in Seattle, another  PR Consultant, while her youngest is a mentally slow 50-year-old who recently moved into his own assisted living apartment nearby.

Ethel is a delightful combination of liberal thought and traditional manners. She served me dinner with cloth napkins while extolling the virtues of Naomi Klein and Bernie Sanders. She makes no differentiation between the global and the personal. “The Benin kings sold their own people into slavery. That is inexcusable. But I liked it there. The students were much more respectful than they are here.”

Ethel is both physically and mentally fit. She ran her first marathon in Seattle and has several quilts made from her T-shirts. Ethel qualified for Boston in 2000, when she was older than I am now. “I didn’t think I could do it but the crowd carried me on.” She bicycle tours in Europe every year, and keeps a cycle there to avoid the hassles of transport. She rides her age on her birthday. “I was in Spain when I turned 75 and rode 75 kilometers instead of 75 miles. That’s not the same thing. This year, I am thinking of riding 76 miles here in Missoula, so I don’t have to carry panniers. I can’t stop though. I have a friend who’s 85 who cycles her age every year. I have to keep up.”

Besides, like many avid cyclists, Ethel has certain routes yet to conquer. “I still have to do Seattle to Vancouver to complete the Pacific Coast and cross Texas to finish the Southern Tier. That will be a hard one because I keep returning to Europe rather than go to Texas. I don’t understand the South. I have a sister who lives in Alabama. What’s with keeping so much food in your house, and guns, and protecting yourself against the future?” 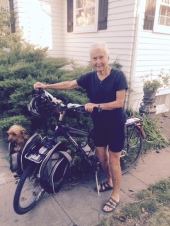 “The word that comes up is fearfully, although that is what we don’t need. Those in power know how to use fear.”

When I awoke the next morning Ethel was long up. She had already listened to NPR, made coffee and breakfast. Later that day she sent me a text with an additional response:

“As I was biking this morning I thought about your question and my answer, and wanted to add this: Yes, my fear is that we will live fearfully, but my hope, my dream, is that we will live peacefully and lovingly in harmony with all beings on the earth. And of course this means that, as Gandhi said, I must be the change I want to see.”

Greetings reader. I am a writer, architect, cyclist and father from Cambridge, MA. My primary blog, theawkwardpose.com is an archive of all my published writing. The title refers to a sequence of three yoga positions that increase focus and build strength by shifting the body’s center of gravity. The objective is balance without stability. My writing addresses opposing tension in our world, and my attempt to find balance through understanding that opposition. During 2015-2106 I am cycling through all 48 mainland United States and asking the question "How will we live tomorrow?" That journey is chronicled in a dedicated blog, www.howwillwelivetomorrw.com, that includes personal writing related to my adventure as well as others' responses to my question. Thank you for visiting.
View all posts by paulefallon →
This entry was posted in Uncategorized. Bookmark the permalink.