Despite my attempt not to draw conclusions across people I talk with until my journey is over, some themes are so striking they cannot be ignored. Without exception, every person I speak with who’s made a non-economic life choice – whether how they work or where they live or what they study – is happy with their decision to step sideways from the economic ladder. No one exemplifies this truth more clearly than Dorothy and Steve Miner, who uprooted their family from suburban Boston and moved to Ashland OR seventeen years ago.

“When our oldest son Jake was in middle school, he was diagnosed autistic. It was our wake-up call to move to a place where he, and our other two boys, could thrive in their best possible way.” Steve’s an engineer, by training and temperament. He and Dorothy built a checklist of places that met their criteria of small cities with four-season climates and a community focus. They identified seventeen potential places, all in the West, flew to Albuquerque with their sons, rented a van, and struck out to visit them all.

“The day we landed in Ashland, we knew this was the place.” Steve described their experience as the three of us walked through the gorgeous preserve that runs from downtown, past the Oregon Shakespeare Festival outdoor performance arena, and up a ravine. “We came to this park. It was a night when Mars was orbiting close to earth. Half a dozen people had set up telescopes and let anyone passing by take a look. I though it was some astrological group, Turns out it wasn’t anything organized. Guys with telescopes figured that if they wanted to view Mars, others would as well. So instead of watching from their homes, they brought their scopes to the park. Six of them, without coordinating their effort.” Dorothy and Steve knew that instant Ashland was the place, but being the thorough engineer he is, they still visited the rest of the towns on their list. 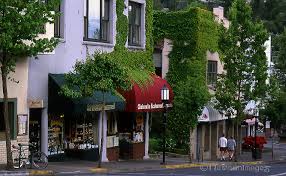 Dorothy and Steve have no regrets of their decision. They love Ashland. They like how the community looked out for their sons as they grew up. “Living here is like being in a fish bowl. That is both good and bad. But when you’ve got three teenage boys, it’s mostly good.”

Like most people I’ve met who’ve made ‘non-economic’ life choices, the economics of Dorothy and Steve’s decision have worked out just fine. Steve’s an expert at turning around tech-driven businesses. Sometimes he works in Ashland or nearby Medford, other times he’s worked remotely. Dorothy’s a Physician’s Assistant whose skills are needed anywhere. The ability to make ‘non-economic’ choices is easier for well-educated people with valuable skills.

Dorothy and Steve’s three sons are grown now. They live far from Ashland, though one is about to return for a stint. But Dorothy and Steve are not about to follow their boys. In fact, they recently downsized from their family home to a smaller place down the street. Ashland is their town now. They aren’t going anywhere else 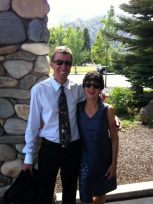 “I’m thinking about what has to change. The disparity between the ‘haves’ and the ‘have-nots’ has to end. I am a ‘have.’ As a ‘have’, I am trying to balance the things I do with what I think are good deeds, but they don’t seem to do much to address the problem.

“The food issue is huge. The American way is free enterprise, but that’s not okay if you’re harming people. The big food companies are doing harm.

“The ‘me’ component of things is more extreme. We have become more isolated and more narcissistic. On the other hand, our children’s generation is better. They are content with less.” – Dorothy Miner

“There are three requirements for happiness in life: something to do today; something to look forward to, and someone to do it with. That’s all you need. If you have the fourth, a stable foundation, then the first three can be sustained over time. We have all four. We want everyone else to have them as well.” – Steve Miner

Greetings reader. I am a writer, architect, cyclist and father from Cambridge, MA. My primary blog, theawkwardpose.com is an archive of all my published writing. The title refers to a sequence of three yoga positions that increase focus and build strength by shifting the body’s center of gravity. The objective is balance without stability. My writing addresses opposing tension in our world, and my attempt to find balance through understanding that opposition. During 2015-2106 I am cycling through all 48 mainland United States and asking the question "How will we live tomorrow?" That journey is chronicled in a dedicated blog, www.howwillwelivetomorrw.com, that includes personal writing related to my adventure as well as others' responses to my question. Thank you for visiting.
View all posts by paulefallon →
This entry was posted in Responses and tagged Ashland OR, Dorothy Miner, Steve Miner. Bookmark the permalink.