Posted on December 9, 2015 by paulefallon

Jim Andrews’ profile on warmshowers.org appealed to me: a father with two sons who like to play board games. As I cycled through a squat neighborhood on the other side of the tracks, I realized my conception of a guy in his forties with a pair of darling tweens was incorrect. Jim’s run-down stucco house sits amidst a yard littered with stuff many of us call junk. I took a cleansing breath, rolled my bike down the drive, greeted the resident Pit Bull, and met my heavy-set host with his huge grey beard and loud shirt.

I’m used to people sussing me out in the first few minutes we meet. Who’s this guy in the garish bike jersey? Is he kooky or cool? This time, I was the one trying to get a compass fix as Jim guided me through the dark back hall and through the kitchen, where his 18-year-old son Benjy fried chopped stuff in a pan. Eventually, people realize I present no harm and might actually be interesting. Similarly, by the time I was settled at the table in Jim’s main room, I realized that the evening was going to be all right. In fact, it proved to be one of the most memorable of my trip. Jim was gracious as any host I’ve had, and if hospitality could be measured against available creature comforts, Jim Andrews would top the chart. 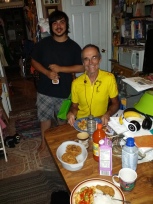 Jim and Benjy rent a small house. The main room has a table and three chairs; the kitchen is a galley with stove, refrigerator, sink and counter. Benjy’s room is beyond the dining area, separated by a curtain. Jim’s room is in the opposite direction, larger, with a door. There are two other bedrooms, which Jim and Benjy sublet: one to a woman with a two-year-old daughter, the other to a young Vietnamese man. The place is crowed with stuff, but its organized clutter. The five souls share one bathroom, possibly the cleanest bathroom I’ve seen on my trip.

Jim grew up in rural Oregon. He wanted to be a missionary in Cambodia, learned Khmer, but never realized his dream. He married a woman who’d escaped the Khmer Rouge. They had two sons. The oldest recently moved out with his girlfriend. Benjy just graduated high school and is figuring out his next steps. There was a stack of board games in the dining rom, though no one suggested we play.

Jim is patient and persevering; he graduated from college twenty-eight years after matriculation. He’s a substitute teacher in nearby Modesto. He gets called two to three days a week but can’t work further away because he sold his car and ten miles is about the limit of how far he can ride his bicycle.

Benjy prepared spicy fajitas for dinner. Jim told stories of growing up and asked about my life on the road. He’d like to tour. He showed me the Portuguese sweetbread, a local specialty, he’d purchased for my visit. I knew it was an expense, so was appreciative, but I didn’t request any. Jim hoped a school would call for him to sub the next day.

After dark, Jim cleared a circle of floor space in his room where I could lay my sleeping bag. In the morning he made oatmeal and coffee, and a pair of cheese sandwiches with the special bread. He took pictures of me, of Benjy and me; Benjy took pictures of Jim and me. Even the friendly pit bull got in the action. No school called to work that day.

As I was getting ready to roll, Jim said, “Not many cyclists stay with us. We’d like to host more. Please give us a good review, so others will choose us.” I gave them a great review: the truth. Jim and Benjy Andrews may not look like exceptional hosts, but they are.

“I don’t complain about being poor. What bothers me is when people look down on me. When I got rid of my car and invested in a bike I had friends who thought it was a mistake not to have a car. Are they really my friends?

“When I look back at my life I messed up so much. I’m trying to slow down, not focus on stuff. I have things to be thankful for.

“Part of my answer is hope. I’ve taken several stress tests. I should be dead. My health is terrible: bad back, no pigment in my skin, hernia. I am dealibg with depression. But, I have hope. I have my sons, my mom, my belief in God. We all have problems but I take one day at a time and I have hope. My motto is ‘Let go and let God.’

“My great aunt was born in 1920. She survived the Great Depression herding sheep for 25 cents a day. My dad was a good man, not a good father. We have no air conditioning. We have an evaporative cooler but it costs too much to run. I just don’t focus on the negatives. I focus on the positive.

Greetings reader. I am a writer, architect, cyclist and father from Cambridge, MA. My primary blog, theawkwardpose.com is an archive of all my published writing. The title refers to a sequence of three yoga positions that increase focus and build strength by shifting the body’s center of gravity. The objective is balance without stability. My writing addresses opposing tension in our world, and my attempt to find balance through understanding that opposition. During 2015-2106 I am cycling through all 48 mainland United States and asking the question "How will we live tomorrow?" That journey is chronicled in a dedicated blog, www.howwillwelivetomorrw.com, that includes personal writing related to my adventure as well as others' responses to my question. Thank you for visiting.
View all posts by paulefallon →
This entry was posted in Uncategorized and tagged Ceres CA, poverty, warmshowers. Bookmark the permalink.