The amazing thing about our post-industrial economy is how efficient we’ve become through increased specialization. The tragic thing about our post-industrial economy is that people get mired in such minutiae they feel disconnected from the big picture, if they even see it at all. This contradiction seems most stark in Silicon Valley, where people are very well paid to solve digital puzzles several degrees separated from human need. Which makes meeting Kitty Miner so refreshing. Kitty’s a Silicon Valley veteran with a sense of humor that helps preserve a broader perspective.

Kitty’s an entrepreneurial jack-of-all-trades. She lived in Sun Valley, Idaho for years, where she raised her two daughters and ran a whitewater rafting company with her husband. She enjoyed watching families disengage their electronics and bond over six days in nature. Her cookbook about outdoor eating is still in print.

Despite enjoying that work, Kitty decided she wanted more traditional employment. She got involved in software product development. Her decision to change proved well grounded. A few years later her marriage ended and Kitty landed as a product manger in San Jose. Like many here, she’s worked for several companies, large and small. Unlike many in this male, immigrant dominated business, “I am used to being the only Caucasian at a meeting, the only woman, the only blonde.”

Kitty’s got an arsenal of funny, cryptic war stories; what constitutes success in Silicon Valley can seem arcane to the rest of us. When Pay Pal was part of ebay, Kitty was in charge of making their payment system compliant with British banking regulations. “In England, transactions have to be processed immediately. None of this letting the bank keep the money for three days like we have here in the States.” Pay Pal stores various elements of each customer’s data on separate servers. This makes their data very secure, but challenging to sync. After several months of coordination, Kitty describes the excitement of running their first British transaction. “We had twenty people on different phone lines, from India, Singapore, the U.S. and England. When the first transaction processed, there were whoops from all corners.” Nice to know an electronic transmission had all the thrill of an international soccer match.

Company shuffles, mergers, start-up failures and layoffs are a daily part of life in Silicon Valley (ebay subsequently spun off Pay Pal). Among the technorazzi, being unemployed is nothing more serious than changing your hairstyle; an awkward transition to a new identity. But Kitty has that nagging sense of ‘what is this all for?’ Since Kitty’s last layoff, she’s been consulting with smaller organizations, often start-ups with a social as well as financial mission. She has a few interesting irons in the fire, including a group creating digital educational materials for developing countries and hopes to land something that’s both permanent and meaningful. 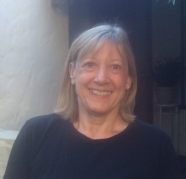 “What I hope or what I think will happen? I think things will get tough. People will have to make tough choices. American kids who have grown up entitled will be challenged. I hope it will lead us back to families and community and social responsibility.”

“We have oversized everything. We have depleted our resources and we are gong to have to pay. We have to plan and anticipate instead of just using.”

Greetings reader. I am a writer, architect, cyclist and father from Cambridge, MA. My primary blog, theawkwardpose.com is an archive of all my published writing. The title refers to a sequence of three yoga positions that increase focus and build strength by shifting the body’s center of gravity. The objective is balance without stability. My writing addresses opposing tension in our world, and my attempt to find balance through understanding that opposition. During 2015-2106 I am cycling through all 48 mainland United States and asking the question "How will we live tomorrow?" That journey is chronicled in a dedicated blog, www.howwillwelivetomorrw.com, that includes personal writing related to my adventure as well as others' responses to my question. Thank you for visiting.
View all posts by paulefallon →
This entry was posted in Responses and tagged Kitty Miner, Pay Pal, San Jose CA, Silicon Valley. Bookmark the permalink.