Posted on January 4, 2016 by paulefallon

Big Sur is much more than a beach. The rugged terrain that cliffs into the sea proclaims the end of the continent. Millions drive the scenic, circuitous route; thousands bicycle the Pacific Coast Trail, yet very few people actually live in this breathtaking but desolate place an hour and a half by car from anywhere.

Ten to fifteen miles south of the village of Big Sur, which is nothing more than a deli and a bar with a few fishing camps, the US Forest Service built a fire station along California 1 where Los Padres National Forest reaches out to the coast. They installed half a dozen hook-ups for manufactured homes hoping a few firefighters would live close to the station. Not all the spaces are claimed. But Murdock Martin put his home in a hollow beyond sight of the passing tourists, protected from the sea, in the shadow of a steep mountain. 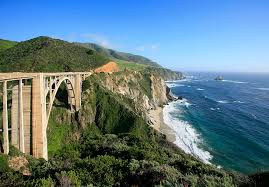 Murdock’s an adventurer. He’s been a fire fighter for eighteen years, for both the National Park Service and the Forest Service. He used to be part of the elite ‘Hot Shot’ Crew. Now, pushing fifty, he captains a fire truck crew of seven. During fire season, which gets longer every summer, he can work up to 16 hours per day for 14 days straight. After that, regulations require mandatory breaks. When not firefighting, Murdock scuba dives for jade along his chilly stretch of ocean. He also aligns adventures with community service streak – last year he worked in a Rwandan orphanage and climbed Kilimanjaro on the same trip.

The only thing Murdock doesn’t do is cycle. However, after seeing cyclists pedal the coast everyday, he became the only warmshowers host for over a hundred miles. He gets dozens of requests; I was fortunate to be his guest number 65.

Murdock is a 49’rs superfan. His house is packed with 49’rs memorabilia. The season ticket seats he had when the team played in Candlestick Park sit in his living room. He’s not a season ticketholder in the 49’rs new stadium. “There was a $15,000 fee for seats as good as I had; it was just too much money.” 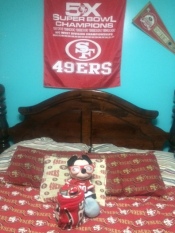 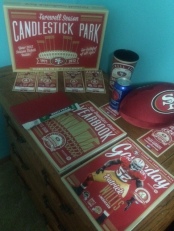 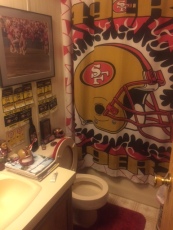 Murdock loosens up his healthy eating kick for cyclists; he grilled sausages for dinner and served waffles with syrup and ice cream for breakfast. I wrote in his guest book and took his picture; he gave me a blank notebook and asked for a postcard from somewhere further along my journey. The US map of his travels show six states he has yet to visit; I’ll send him one from a place he’s never been. 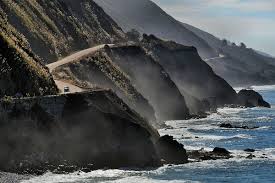 Anyplace you live reveals its shadows, even Big Sur. Beyond fire season things appear quiet here. But every week, sometimes three or four times a week, Murdock and his crew get called to clean up after someone drives off the cliffs. “It could be accidents – people looking at their cellphones when they should be paying attention to the road – but a lot of it is suicide. People come to Big Sur to end their lives.” When I pedaled on the following morning, the breathtaking scenery took a tragic twist.

“Health is something people take for granted. If you can have your health, tomorrow’s going to be a great day. That’s why we need to diet and exercise. What happens at the end of The Biggest Loser? The winner is off all of his meds. I recently got off high blood pressure medicine. I lost ten pounds. My doctor said, “Ninety percent of people want to get on meds – you want to get off them.” I am active in my job, but I needed to change my diet to lose weight. Keep your body and mind in good shape through diet.”

Greetings reader. I am a writer, architect, cyclist and father from Cambridge, MA. My primary blog, theawkwardpose.com is an archive of all my published writing. The title refers to a sequence of three yoga positions that increase focus and build strength by shifting the body’s center of gravity. The objective is balance without stability. My writing addresses opposing tension in our world, and my attempt to find balance through understanding that opposition. During 2015-2106 I am cycling through all 48 mainland United States and asking the question "How will we live tomorrow?" That journey is chronicled in a dedicated blog, www.howwillwelivetomorrw.com, that includes personal writing related to my adventure as well as others' responses to my question. Thank you for visiting.
View all posts by paulefallon →
This entry was posted in Responses and tagged 49r's, Big Sur, forest fire fighting, San Francisco 49r fan, suicide at Big Sur. Bookmark the permalink.