One of the clearest indicators of personal well-being is how much a person controls his or her own fate. Too many obligations and too few opportunities wear a body down. Too much freedom makes people disconnected, maybe reckless. There is a sweet spot, where we have enough responsibility to be part of the social fabric but enough autonomy to create our own niche. We may be able to influence that balance by how we craft our families and careers, but we can never determine it completely. Layoffs, divorces, societal shifts affect us in ways we can’t foresee. Just as important to setting our course, is being resilient to life’s storms. 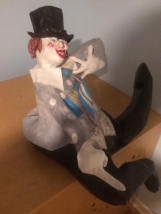 These thoughts filtered through my head after an evening with Diane Haithman and Alan Feldstein, a middle-aged couple that have enjoyed a fair share of education and Baby Boomer opportunities, as well as setbacks that others might not surmount. Near 60, they are at the top of their game, engaged in work that is personally rewarding and culturally rich. I don’t think we’ll ever know why some people rise to the challenges life presents, while others abide them, and still others crumble beneath their weight. But it’s worthwhile to case study people who navigate life to its fullest advantage.

“Falling was the best thing that ever happened to me.” Alan explained during the rather long tale of how he and Diane met. Diane, a feature writer for the LA Times via the Detroit Free Press, had interviewed Alan, a recently divorced entertainment lawyer and youngish member of LA cultural boards, for a story about Arts funding. After the article came out they had dinner together, but nothing sizzled until almost a year later, when Alan feel forty feet rock climbing, was hospitalized, and endured a leg-cast convalescence.

He and Diane reconnected. Alan invited her to a concert at the Hollywood Bowl (provided she would drive) and it’s been happily ever after. Sure, there was an ex-wife and kids and other details, but anyone who sees how they gaze at each other knows that Diane and Alan are a good thing.

Alan’s law practice morphed into nutritional supplements and their increasing regulation by the FDA, FTC, and state’s attorneys general. Necessary work, but hardly exciting. His passion for rock climbing simmered and he began to kayak. Kayaking took him to Tanzania where, in 2010, a guy convinced him to leave his law practice and start a safari company. Alan has never looked back. “There are a lot of unhappy lawyers out there who say they want to do what I do. I say, ‘You can.’”

Diane got laid off after 22 years at the LA Times. She took up freelancing, became an adjunct professor at USC and wrote a novel. “Set in Detroit in 1983. I just wrote what I wanted, no agent, no format.” In 2014 she published a more marketable novel that mined her LA experience. Dark Lady of Hollywood is, “a mash-up of TV sitcom and Shakespeare” as well as a publishing success.

Alan still practices some law so he and Diana can continue a lifestyle more posh than freelancing affords. Although Infinite Safari Adventures is not yet a full-time occupation, it is Alan’s full-time avocation. He has ‘adopted’ an enterprising young man in a Tanzanian village and installed fresh water wells. His heart is in Africa. Still, it’s important to Alan that safaris are a business rather than a hobby. “All my life I’ve been counseling businesses that often made mistakes. I want to do this, and do it right.”

It’s easy to say that Diane and Alan have had more advantages than not, that early career success is easier to expand later in life. To be sure, theirs is not a Horatio Alger tale of bootstrap pickup. But the world is full sparkling youth who morph into burned out, bummed out middle-aged folk, while Diane and Alan are energized, resilient, and creative. We could all use more of what they’ve got. 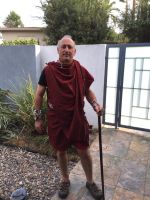 “Are you asking ‘I’ or ‘we’? My kids will live very differently than me. They are technologically sophisticated. Yet, there will be more physical sharing.

“I am excited, personally, about tomorrow because I’m excited about what I’m doing today. My children and their friends make me hopeful. They are all doing good things.” – Alan 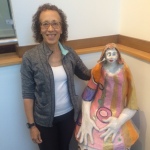 “I wonder how young people will get a toehold. I’m thinking of the USC Journalism majors I teach. They don’t grasp the profession or their place in it. A few don’t think that way, but many are lost.” – Diane

Greetings reader. I am a writer, architect, cyclist and father from Cambridge, MA. My primary blog, theawkwardpose.com is an archive of all my published writing. The title refers to a sequence of three yoga positions that increase focus and build strength by shifting the body’s center of gravity. The objective is balance without stability. My writing addresses opposing tension in our world, and my attempt to find balance through understanding that opposition. During 2015-2106 I am cycling through all 48 mainland United States and asking the question "How will we live tomorrow?" That journey is chronicled in a dedicated blog, www.howwillwelivetomorrw.com, that includes personal writing related to my adventure as well as others' responses to my question. Thank you for visiting.
View all posts by paulefallon →
This entry was posted in Responses and tagged Alan Feldstein, Dark Lady of Hollywood, Diane Hatihman, Hollywood Bowl, Infinite Safari Adventures, LA Times, Los Angeles. Bookmark the permalink.