“I go through tangents once in a while, so stay with me.” Lisa Arangua tossed that comment my way while I was scribbling and grasping for coherent threads in our conversation at her downtown LA office. Lisa speaks in quick, short sentences and switches topics at random; from her daughter’s cancer to childhood obesity rates to mentoring a wealthy murderer’s sons, to implementation science, to the virtues of hiring immigrants. I floundered during our first fifteen minutes together. Then, over the course of a meandering hour and a half conversation, her statements began to connect. Lisa’s life, her work, her family, her philosophy, and her rapid-fire energy are tightly woven. Each informs and supports the other. What appears random as a Surrealist art film becomes as finely crafted as Alejandro González Iñárritu’s movie Babel.

“2013 was a bad year. I got laid off from UCLA. I had a car accident. My daughter Olivia, who was ten at the time, was diagnosed with endocrine cancer.” The doctors at UCLA recommended a treatment strategy that didn’t feel right. Lisa consulted pediatric oncologists from CHOP, Sloan Kettering and MD Anderson. Together, they developed a treatment protocol and radiation dosage levels. Coordination at this level is often stymied by research and funding restrictions, though Olivia’s case eventually landed in the literature. “The four docs wanted to share information and collaborate. Time wasn’t an issue – oncology docs give more time and attention than they have. They have extraordinary concern for their patients.”

When Lisa lost her position as an implementation scientist at UCLA, a former colleague encouraged her to move to the LA Department of Public Health, where she works on programs to stem childhood obesity and raise nutrition awareness. Lisa applies the intense coordination that helped bring Olivia into remission to her work. “If we’re going to solve the world’s problems, coordination is how it’s going to happen. We want to transform the food environment. We use tobacco as a model. We take a micro-approach: individual efforts, and a macro approach: mass marketing. Smoking is no longer socially acceptable. We are trying to apply these ideas to food.” Lisa confronts obstructions, fiefdoms and special interests in every direction. She focuses on getting the constituents together and rowing in the same direction. “Coordination is the future. Grantors are beginning to require that. That is good.”

Changing the eating habits of an affluent nation is an ambitious undertaking. Programs have to be staged to address what we can control. “LA County has ten million people. It’s as large as many countries. We’re starting in the schools – something we control. We started in our two poorest areas, South LA and Antelope Valley. We met with families. We solicited their input. 93% of the parents in Antelope Valley consider childhood obesity a problem. But they don’t want a nanny state. Inform our choices but don’t take our choice away.” The public health department developed a green/yellow/red light food display system. They added nutritional content to menus. They passed a procurement policy to guide school offerings. Now they’re working on portion size, so preschoolers and sixth graders don’t get the same amount. “We work in the schools now. The retailers will come later.” 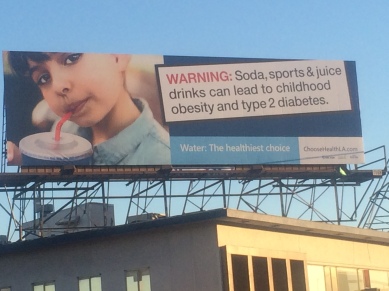 Lisa hopes these small steps will lead to small successes, which will lead to larger steps. She always keeps the big picture in mind. “We need to spread this beyond schools. We need community gardens. People have to be in touch with their food. We have to stop subsidizing meat and start subsidizing fruits and vegetables. Why are we subsidizing milk? We are the only mammal that drinks milk beyond infancy; the only mammal that drinks milk from another mammal.”

Those big steps won’t happen because of policy, they will only happen when there is a champion. “In order for implementation to really happen, you have to have a champion. Someone with fire in their belly.” Someone like Lisa.

“It’s all about community. Bringing the right people, the smart people, the people on fire, together. I hope we teach kids the value of community and empathy. I hope we start creating more leaders.

“We need to give our kids more survival skills. We protect our children too much. My daughter has had an epic test of her strength. We have bonded over that. We took our older kids on a 300-mile paddle trip. We hit a thunderstorm and paddled for life. We’re better for having that test.

“Our Western way of living is dismal and deadly. I hope, this is a hope rather than a how, I hope we stop doing national health experiments. The cell phone is our next public health crisis. The evidence is amassing that these are going to cause all kinds of health problems. Neurosurgeons are finding more tumors. Cell towers are being built next to schools and in parks. They are toxic accumulations.”

Greetings reader. I am a writer, architect, cyclist and father from Cambridge, MA. My primary blog, theawkwardpose.com is an archive of all my published writing. The title refers to a sequence of three yoga positions that increase focus and build strength by shifting the body’s center of gravity. The objective is balance without stability. My writing addresses opposing tension in our world, and my attempt to find balance through understanding that opposition. During 2015-2106 I am cycling through all 48 mainland United States and asking the question "How will we live tomorrow?" That journey is chronicled in a dedicated blog, www.howwillwelivetomorrw.com, that includes personal writing related to my adventure as well as others' responses to my question. Thank you for visiting.
View all posts by paulefallon →
This entry was posted in Responses and tagged childhood obesity, LA County Public Health, Lisa Arangua, nutrition. Bookmark the permalink.