“The mind is like a knife. I can kill with it or butter bread with it. It’s not the knife’s fault what I do with it.”

Kevin was raised in a Baptist family. Two weeks after high school graduation, his sweetheart was killed in an automobile accident. As a young man he realized that religion offered emotional satisfaction but didn’t answer the basic questions: who are we? Where are we going? Why are we here? In his 30’s, Kevin spent three years circling the globe. He met Mother Teresa, spent three weeks with the Dali Lama, talked with scientists, physicists, and yard workers, and performed the 10-day Vippassana Mediation three times. “I’ve been questing ever since.”

Kevin’s 56 now, a single man and partner in a food consulting firm that guides Korean companies to create industrialized food products. “One of our clients wanted to make an Oreo-type cookie. We couldn’t reproduce Oreo’s; that would be illegal. We found two of the original Oreo inventors, brought them to Korea and within three weeks created a commercial quality cookie.”

Evers since his three-year trek, Kevin’s continued to explore. He scuba-dived all seven continents and took up underwater photography. “Photography was my means of sharing scuba diving and the underwater world with my family and friends.” He began to photograph Opisthobranches, tiny marine gastropods barely visible to the naked eye. “I focus on anatomical accuracy. I can spend thirty minutes on a subject, to get a particular view.” Kevin is now the world’s leading photographer of these mollusks. “Not a month goes by that a scientist doesn’t use one of my images in a publication.” In 2013, the Adventure Club of Los Angeles named Kevin ‘Adventurer of the Year’.

Kevin’s fascination with a creature so small and difficult to observe is all part of his search for greater meaning. “The ability to think is the human’s sole advantage over other animals.” There’s a reverie, a perspective that comes while seeking and documenting this tiny animal deep in the sea. “America is a huge country, but it’s full of insular people. There’s more to life than comfort and security. Scuba diving in Antarctica was very difficult, but the experience outweighs the inconvenience. The happiest folks I’ve even seen are barefoot peasants in Nepal. I guess it all comes down to values.” 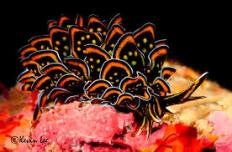 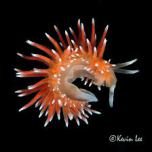 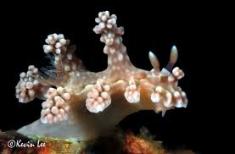 “It’s hard to answer the question without a timeframe. In two to three billion years the sun will flash into a super nova and cook the earth. The question is, will we as a species survive until than?

“When the religious blinders came off I jumped head first into philosophy. That took me into a three-year journey of backpacking to explore what do people want in life? We have universal core traits. We all want the same thing; security, creative outlets, connections to family.

“The mind is our differentiating tool and also our biggest downfall.

“I am a hopeful agnostic. If we kick the bucket and there’s nothing, that would be okay. But it would be nice if there was something more. I have a bookshelf on philosophy and another on physics. I bridge that divide. It’s actually not a divide. Everything comes from stardust.

“It all goes back fourteen billion years to the Big Bang. What happened before that? Scientists tell us that the universe is expanding and will expand forever, but what comes after that?

“For a long time I wanted to be a minister, but ultimately I couldn’t rationalize the disconnect with science. Transubstantiation? That makes spiritual sense but no physical sense. Christians need to be ‘children of Christ’, blind believers. Religion offers us a lot: socialization, comfort, economic strength; it moderates negative behavior. There are positive functions to religion. But it does not correlate with reality. I am looking for the comfort that my mind can rationalize.”

Greetings reader. I am a writer, architect, cyclist and father from Cambridge, MA. My primary blog, theawkwardpose.com is an archive of all my published writing. The title refers to a sequence of three yoga positions that increase focus and build strength by shifting the body’s center of gravity. The objective is balance without stability. My writing addresses opposing tension in our world, and my attempt to find balance through understanding that opposition. During 2015-2106 I am cycling through all 48 mainland United States and asking the question "How will we live tomorrow?" That journey is chronicled in a dedicated blog, www.howwillwelivetomorrw.com, that includes personal writing related to my adventure as well as others' responses to my question. Thank you for visiting.
View all posts by paulefallon →
This entry was posted in Responses and tagged Kevin Lee, Opisthobranch, scuba diving, underwater photography. Bookmark the permalink.