The paths and intersections of Eulee Yang’s and Carol Veilleux’s lives illustrate that we cannot know what experiences will prove defining at the moment they occur. Rather, if we remain open to whatever life offers, the people and places that resonate with us find their way into the fabric of our lives; sometimes many years later.

Carol loved cycling in her native Maine. In 1974 she embarked on a coast-to-coast trip. “This was before long distance cycling was popular. People thought I was crazy.” After reaching the West Coast, Carol came through Tucson. She immediately liked the place, though she continued on and didn’t return for many years.

A friend cajoled Eulee into riding the weeklong Cycle Oregon. Eulee enjoyed riding, but was disturbed by the imbalance between men and women, both in the saddle and in camp. She started Luna Tours, a company that organized women’s cycling rides. “Luna Tours was not about proving anything. It was about coming together and travelling at our own pace.” Eulee became a bicycle enthusiast until she suffered a concussion in an accident nine years ago that resulted in chronic balance issues.

Carol and Eulee met in San Francisco in the 1980’s. Carol laughs as she says, “We felt a connection, but we were with other partners, so we went our own ways.” Ten years passed before they met again; at which time each was single. They have been together ever since.

Eulee and Carol lived in Bozeman MT and were involved in the Buddhist community there. The person who owned the Buddhist Center property needed to sell it, so they purchased it to ensure the center’s continuance and lived there for several years. However, the after effects of Eulee’s concussion as well as Carol’s increasing back problems from an accident, exacerbated giving birth to their son Eli, forced them to reconsider living in such a harsh place. They moved to Tucson, a welcome place in Carol’s memory, and return to Bozeman every summer.

Tucson has proved positive for their family. Eli recently graduated high school and is taking a gap year in Guatemala before starting college. Eulee and Carol have taken advantage of a range of Eastern and Western medicine to address their medical conditions. Eulee, a physician, is fascinated by neuroplasticity. The day we met, she was deep into Norman Doidge’s The Brain that Changes Itself. After eighteen years, Carol has stopped taking any narcotics for back pain. Her path to being medication-free included prolotherapy, meditation, spiritual practice, pain treatment, acupuncture, and herbal treatments by the Tibetan Doctor Dickey. “The pain / pleasure circuits are the same pathways. If you can find pleasure through the pain, that can reduce pain.”

Carol has a high opinion of Tibetan medical traditions. She told a story of two Tibetan men studying to be doctors. A patient came with a chronic condition. He was poor, and paid for treatments with fresh baked bread. The students had two different herbal remedies available, one treated the symptoms, the other alleviated the disease. One of the students loved the bread, so he gave the patient the palliative herbs, rather than the curative ones. The patient would be comfortable but also continue to bring bread. The other student insisted t 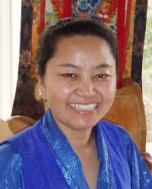 he patient be given the curative herbs. The student who dispensed only the palliative was let go from his studies. “To be a doctor in Tibet, one needs a Karmic connection. The best Tibetan doctors are so humble. They are about alleviating all suffering. They don’t want to add to it.”

The story is simple, and obvious. Yet within our own medical system, how often is treatment skewed to benefit the parties who make money.

It’s been more than forty years since Carol first came to Tucson. She came and left, met Eulee and went separate ways, united, built a life together, raised a son, suffered parallel conditions and found ways through their pain. Back in Tucson.

“Western religion looks at the differences rather than the similarities. The Tibetan Lama will tell you that every path is a good path. I hope the East and West can meet on spiritual ground. Can we make our connections based on our commonalities rather than on aggression?” – Carol

“I pray that we can all live in peace and harmony with our families and friends. I hope that can spread to the entire world. I think that is not a pipe dream. We are all the same. Your happiness and my happiness is the same. We act like there is a finite amount of happiness. But there is infinite happiness.” – Eulee

Greetings reader. I am a writer, architect, cyclist and father from Cambridge, MA. My primary blog, theawkwardpose.com is an archive of all my published writing. The title refers to a sequence of three yoga positions that increase focus and build strength by shifting the body’s center of gravity. The objective is balance without stability. My writing addresses opposing tension in our world, and my attempt to find balance through understanding that opposition. During 2015-2106 I am cycling through all 48 mainland United States and asking the question "How will we live tomorrow?" That journey is chronicled in a dedicated blog, www.howwillwelivetomorrw.com, that includes personal writing related to my adventure as well as others' responses to my question. Thank you for visiting.
View all posts by paulefallon →
This entry was posted in Responses and tagged Bozeman, Bozeman Dharma Center, Carol Veilleux, Cycle Oregon, Eulee Yang, Luna Tours, MT, The Brain that Changes Itself, Tibetan Doctor Dickey, Tibetan medicine, Tucson AZ. Bookmark the permalink.