Ron Kaczor grew up in Union, NJ but spent summers with an aunt and uncle who introduced him to Native American traditions. He spent four years as a Marist monk, came out as a gay man in the 1970’s, and moved to Vermont where he and his partner owned a guesthouse outside of St. Johnsbury.

Ron moved to Arizona permanently in 1987. He lived outside of Phoenix and moved to Portal in 2005, where he runs the Coronado National Forest Visitor’s Center. Portal is a ranching town with a scientific edge. The Museum of Natural History’s Southwestern Research Center is located here because of the biodiversity resulting from the confluence of the Rocky Mountains, Sonoran Desert and Chihuahuan Desert. 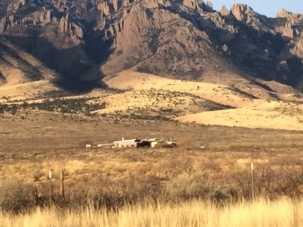 Rom’s 1980’s off-grid passive solar house lies in a long shallow slope like a lizard basking in the sun. It has a shallow roof, deep overhangs to deflect summer rays, and high north windows for cross ventilation. It also has a Buddhist meditation room. He’d like to create a tiny house campground or meditation center on his 95 acres.

“You go to Germany or Japan and they are almost totally green. Not America. It is owned by oil companies.” We get a skewed vision of the world by living here. “During Vietnam I operated short wave radio to listen to news from Canada. What they reported was so different from what we heard.” Since then, Ron has remained skeptical of our media.

Ron was ordained a Buddhist priest in Taipei in 2005. I asked him why he thinks Buddhism is declining worldwide while religious affiliations overall are increasing. “I like taking control of my mind and being in the moment. But people are followers. Look at Trump. We worried about Sara Palin. Compared to Trump, she looks like Einstein. The sheep hold on our world is getting scarier. I go to the city and watch everyone shopping. There is no happiness.”

In 1987 Ron started an Arizona touring company that included visits to the reservations he frequented as a child. Whenever people on his tours asked him how he could stand the poverty, he asked them to listen. They always heard laughter and joy.

“In one phrase, ‘fasten your seat belts, it’s going to be a bumpy ride.’

“I just finished reading The Sixth Extinction. Living in this community with all the scientists we have here, watching Fukushima get swept under the rug, not being able to fish from the Pacific, watching the religions of Jerusalem change the relationship of man to nature, I can’t be positive. When and how are we going to change? We are tied to this shallow concept of capitalism that has swept the world.”

Greetings reader. I am a writer, architect, cyclist and father from Cambridge, MA. My primary blog, theawkwardpose.com is an archive of all my published writing. The title refers to a sequence of three yoga positions that increase focus and build strength by shifting the body’s center of gravity. The objective is balance without stability. My writing addresses opposing tension in our world, and my attempt to find balance through understanding that opposition. During 2015-2106 I am cycling through all 48 mainland United States and asking the question "How will we live tomorrow?" That journey is chronicled in a dedicated blog, www.howwillwelivetomorrw.com, that includes personal writing related to my adventure as well as others' responses to my question. Thank you for visiting.
View all posts by paulefallon →
This entry was posted in Responses and tagged Buddhist, Coronado National Forest, Museum of Natural History Southwestern Research Center, Portal AZ, Ron Kaczor, The Sixth Extinction. Bookmark the permalink.