Thanks to Harrison Ford, being an archeologist is undeniably cool. “You have your Indiana Jones moments. One day I was out on a dig and the weather took a turn for the worse. The wind picked up and it began to rain. I finished documenting a fragmentary spear point I had found, picked it up and raced to the vehicle to pack it in the collection as the rest of the crew covered the excavation with tarps. While there I compared it with another fragmentary spear point found in that same area the previous day and discovered that the two fit, together representing an unfinished Plainview point. I was the first human to connect the two since it was broken ca. 9,000 years ago.”

Those moments, however, are rare according to Andy Cloud, Director of the Center for Big Bend Studies in Alpine, Texas. Like almost every other job, archeology requires a fair amount of grind. “We are trying to determine the extent of human habitation throughout this region. We do it by hand. When studying an area, we begin with a long line of people moving as one across the landscape, looking for evidence of artifacts. We have a predictive model that tells us, if we find something in a particular microclimate, there is good likelihood other evidence will exist in similar locales.”

Big Bend National Park and its adjacent ranches are rich in evidence of ancient people. “Genvieve Lykes Duncan site, forty miles south of Alpine, has dated remains 11,000 years old. The people were nomads. We believe they stayed in one area for three or four weeks, and them moved on, in a regular circuit based on plant foods available. They used rock structures and caves for shelter or camped in the open.

“Later, along the river at La Junta, near Presidio, we’ve found evidence of agricultural villages dating from about 1200 AD.They lived in houses (jacals) constructed in pits, as the summers get very hot in this area and the pithouses were cooler than above-ground dwellings. We think they were semi-sedentary. They had to stay near their fields during the growing season, reverting to a hunting and gathering lifeway during other parts of the year.”

Survivors of the Cabeza de Vaca shipwreck who traveled through West Texas in the 1530’s wrote about such people. When Spanish explorers arrived in the 1580’s, the local people told stories about earlier white visitors, which corroborates Cabeza de Vaca’s account from another perspective.

Andy grew up in Austin. At age 12 he visited Guadalupe Canyon before it was a National Park. The landscape and remains triggered his interest in archeology. He worked in Big Bend National Park in the 1980’s, returned to Austin to work for the Texas Historical Commission, came to the Center for Big Bend Studies (CBBS) in 1995, and became Director in 2008. He loves his work and life in West Texas. “When I give lectures to school children, I tell them, ‘Try to find what you like to do and follow through.’”

CBBS’ original director, 1987, was a historian. The first Journal of Big Bend Studies was published in 1990 with articles about the area’s history and pre-history. Since then archeology has become a larger focus on CBBS’ work, but Andy values a balance between history and archeology. “History is what we document by written record. In this area, that is from about 1800 to today. Protohistory is the period of sketchy or referenced writing; 1535 to 1800. Prehistory is what occurred before written record, prior to 1535.” 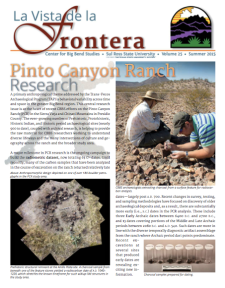 Archeological exploration of this area began in the 1930’s but fell behind after World War II. “Archeology entered a period where it focused on sites that were exposed during development. Out here, where there were fewer pipelines and projects, we fell behind.” Since 1995, the pace of exploration has increased. “We’ve made a lot of progress in twenty years, but our work will never be done.”

Andy considers history as more fluid than archaeology. This surprised me until he explained; “Writing is always subject to new interpretation, based on new understanding.”

Andy’s office is full of artifacts as well as history. His ancestor, Daniel Cloud, wrote a letter on his way to the Texas fight for independence that is on display at the Alamo in San Antonio: “If we succeed, the Country is ours. It is immense in extent, and fertile in its soil and will amply reward all our toil. If we fail, death in the cause of liberty and humanity is not cause for shuddering. Our rifles are by our side, and choice guns they are, we know what awaits us, and are prepared to meet it.”

“I am big into gardening and cycling. I am also rapidly approaching retirement, so my tomorrow will be different from many others.

“As a society, we are going to have to monitor limited resources. Capitalism can be a good thing, but it can be evil, driven by greed. I kind of like what Bernie Sanders is saying.

“Some things I am learning about prehistoric peoples I may need to apply. For instance, the aboriginals learned there were plants in the desert, such as agaves and yuccas, that had to be slow-cooked at low heat in order to break down the complex sugars and provide sustenance. They developed slow cooking earth ovens, thermal features that used heated stones that were buried with the plant foods for ca. 24–48 hours. This technology opened up the enormous amount of sustenance available in the desert to prehistoric peoples. At least I know how to replicate these ovens!”

Greetings reader. I am a writer, architect, cyclist and father from Cambridge, MA. My primary blog, theawkwardpose.com is an archive of all my published writing. The title refers to a sequence of three yoga positions that increase focus and build strength by shifting the body’s center of gravity. The objective is balance without stability. My writing addresses opposing tension in our world, and my attempt to find balance through understanding that opposition. During 2015-2106 I am cycling through all 48 mainland United States and asking the question "How will we live tomorrow?" That journey is chronicled in a dedicated blog, www.howwillwelivetomorrw.com, that includes personal writing related to my adventure as well as others' responses to my question. Thank you for visiting.
View all posts by paulefallon →
This entry was posted in Responses and tagged Alpine TX, Andy Cloud, archeology, Big Bend, Cabeza de Vaca, Center for Big Bend Studies. Bookmark the permalink.