“When I pull into Wal-Mart, I get swamped.” GB is proud of his car, which is a showpiece. The 1975 Lincoln Continental, which he got five years ago, has an elaborate, and ever-changing exterior paint job. “I had a 1971 Continental before that, and a 1968 Seville before that. I have good taste.”

GB is a 68-year-old retiree born in Sandis MS who has lived all over the country. His father was a schoolteacher. GB quit school after eighth grade but is a self-taught engineer. “I have four sisters, all school teachers, but they can’t figure out what I can.” 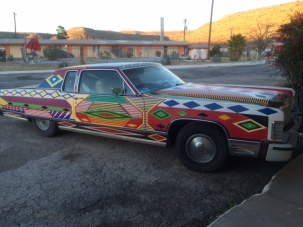 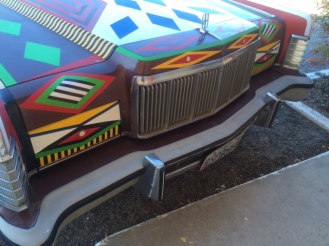 GB had been staying at the Budget Inn in Sanderson for several weeks, but was planning to decamp for Del Rio in a day or two. “I created something for people to sit around that I am trying to sell; a large scale metal and ceramic picnic structure. I know there’s demand, but everyone wants to see the first one built before they buy it.” He also needs to pick up his Social Security check. “I would get more except I didn’t work for thirty-one years.”

GB has lived in northern Minnesota, Kansas, Oregon, and Hawaii. “I went to Hawaii in 1980 for a Portuguese girl. Really pretty and she didn’t talk much – my kind of girl. I was in Kansas when I got diagnosed with diabetes. It took me some time to get it under control. Haven’t had a drink since I was 42, stopped smoking at age 55. I lost my teeth along the way. Was going to get a partial in Oregon, but they put some sort of anesthesia in my mouth that didn’t feel good, so I never went back.”

Wherever GB goes he tries to get backers and fabricators for his gazebo. “I figure the basic model will take $40,000 for materials and I can sell it for $100,000. I have this idea for a transparent model that will be worth a million. I keep changing it up; that’s what creation is all about.” 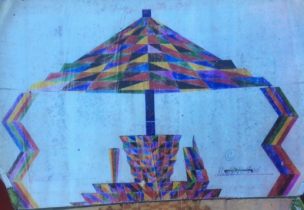 “You live in Boston. I’ve never been there. I’ll come visit you.”

Greetings reader. I am a writer, architect, cyclist and father from Cambridge, MA. My primary blog, theawkwardpose.com is an archive of all my published writing. The title refers to a sequence of three yoga positions that increase focus and build strength by shifting the body’s center of gravity. The objective is balance without stability. My writing addresses opposing tension in our world, and my attempt to find balance through understanding that opposition. During 2015-2106 I am cycling through all 48 mainland United States and asking the question "How will we live tomorrow?" That journey is chronicled in a dedicated blog, www.howwillwelivetomorrw.com, that includes personal writing related to my adventure as well as others' responses to my question. Thank you for visiting.
View all posts by paulefallon →
This entry was posted in Responses and tagged 1975 Lincoln Continental, auto paint job, Sanderson TX. Bookmark the permalink.