Last I was in New Orleans was a week during the winter of 2005 and again in 2006 to built houses at Musician’s Village, part of Hurricane Katrina reconstruction. Habitat for Humanity’s work there is long finished. All of the homes are complete, purchased, and occupied. The first years after the hurricane, HFH NOLA was the Crescent City’s largest homebuilder; it continues to be a major developer. Marguerite Oestreicher, Director of Advancement, invited me to HFH’s construction area on America Street in New Orleans East on a Saturday morning.

About a hundred people gathered on a half-dozen sites: a handful of HFH supervisors, AmeriCorps volunteers, weekend warriors from local colleges and volunteer fire departments, Marine regulars, as well as future homeowners, who must contribute at least 350 hours of volunteer service as part of their purchase agreement. Groups were excavating trenches, installing foundations, attaching siding, and finish painting. As in any volunteer endeavor – as in any endeavor of any kind – some people worked diligently while others picked at their paintbrushes or leaned on their shovels. In sum, the energy was palpable; progress real. 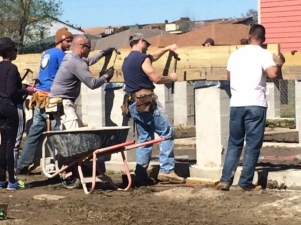 Last spring, HFH NOLA sponsored a build-a-thon: ten houses in ten days to commemorate ten years since Hurricane Katrina. “Over five hundred people came from across the world to participate. Dozens of international media covered the event and aired stories during the August anniversary. National media was caught off guard; they arrived a few days before the anniversary and wanted instant stories.” Most Americans don’t appreciate the global significance of Katrina. “Until the Ninth Ward comes back, in any eyes of the world, New Orleans has not come back.”

I asked Marguerite how the hurricane affected planning and construction in the city. “The City never changed development patterns, it was politically impossible. But it changed the way we build. We build higher, from 4 to 13 courses of block vertically. We are trying to build to the environment, but who knows what that will be a hundred years from now? We have coastal erosion and subsidizing.” 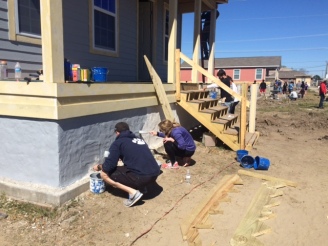 The hurricane also left the city owning many abandoned lots. “The City passed an ordinance called, ‘The lot next door.’ It gives people living next to blighted property a favorable claim to it. The program has done much to alleviate blight, but there are due process implications.”

With so many buildable lots available, HFH NOLA has a backlog of houses waiting to be built. “We build 30 houses per year. We are one of the largest, though not the largest, Habitat for Humanity organizations. We like to build a group of houses together to create the halo effect. We initiate other community development.

“We have just been awarded 48 lots in the Lower Ninth Ward, our first development in that area. We plan to build one hundred units within three to five years. Some will be rentals that Habitat for Humanity will own and operate. We have created an incubator program to move residence from rentals to ownership.” 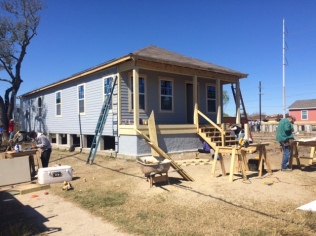 HFH NOLA builds an Energy Star equivalent three-bedroom house for $85,000. The homeowner needs $2500 in escrow, Habitat for Humanity carries the primary mortgage, and the buyer receives a soft second to make up the gap to market rate.

Marguerite is a long time New Orleans resident who evacuated during Katrina. “I woke to 6 feet of water.” She went to Shreveport, unaware of the extent of damage until a photo of her neighborhood made the cover of the New York Times. “I was devastated, but my son said, ‘You don’t get it. We get to start over. Most people don’t have that chance.’

“Katrina is history to most of the people working here today. But for me, it was a new beginning. I used to be an art dealer and analyst. Now I do meaningful work in neighborhoods I never knew. We create authentic connections that create community. This is the most enjoyable job ever.”

“I think holistically, but I have to think locally. We are going to see more shared resources, more house sharing, more extended families. We are living in a world of environmental uncertainty. Climate change is happening so fast here; we lose three football fields of land per day in Louisiana. Before Katrina it never crossed my mind that the levees would fail. I worried about wind and rain, but never flood.”

Greetings reader. I am a writer, architect, cyclist and father from Cambridge, MA. My primary blog, theawkwardpose.com is an archive of all my published writing. The title refers to a sequence of three yoga positions that increase focus and build strength by shifting the body’s center of gravity. The objective is balance without stability. My writing addresses opposing tension in our world, and my attempt to find balance through understanding that opposition. During 2015-2106 I am cycling through all 48 mainland United States and asking the question "How will we live tomorrow?" That journey is chronicled in a dedicated blog, www.howwillwelivetomorrw.com, that includes personal writing related to my adventure as well as others' responses to my question. Thank you for visiting.
View all posts by paulefallon →
This entry was posted in Responses and tagged America Street, Dan Cahoon, Habitat for Humanity, HFH NOLA, Hurricane Katrina, Marguerite Oestreicher, New Orleans LA. Bookmark the permalink.