Nine months ago I spent a night in the original Sun City, AZ, the first US community exclusively for people over age 55 where, in 1960 an 800 square foot house cost $10,000; air conditioning was optional. People snapped them up as much for the community centers and golf courses as the concrete block cottages. Del Webb, Sun City’s developer, is long dead, but there are over fifty Del Webb communities in twenty states that reflect the evolution of active retirement, an evolution that parallels our national trend toward less community. 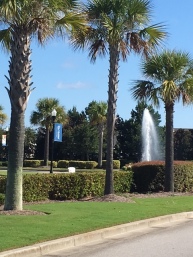 Del Webb Charleston has a community center and swimming pool, organized parties and tennis courts, but no golf courses. Instead it features lagoons – fourteen of them – created by bulldozers shaping the swamp into buildable lots. The focus of development is densely packed individual homes. Garages dominate front yards. My hosts live in a 3-bedroom 2400 square foot house that is as unrelated to its Sun City predecessor as a McMansion is to Levittown. 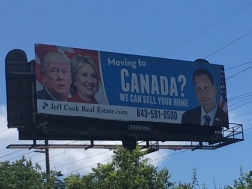 The ride to Charleston was not pretty. North Charleston is a poor city. Vehicles funnel through the neck of highways and dashed commerce, racing to Charleston’s charming tourist center. I circled The Citadel campus where new plebes were being indoctrinated. Such a loud place. Yelling is an integral component of military education.

Google maps showed that my host’s home bordered the Ashley River, but the reality was much more impressive. Deb lives in the last of a modest row of townhouses; the sunset views of the marsh from every room are spectacular. I asked whether her house flooded during the massive rains last year; rains that left much of the Del Webb community thirty miles upstream under water. Though barely two feet above high tide, her house had stayed dry. The difference between a natural marsh and a swamp dredged into lagoons. 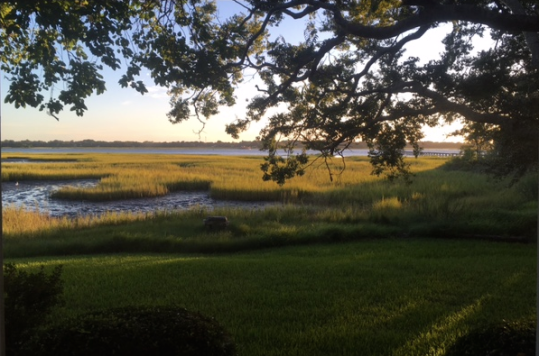 Greetings reader. I am a writer, architect, cyclist and father from Cambridge, MA. My primary blog, theawkwardpose.com is an archive of all my published writing. The title refers to a sequence of three yoga positions that increase focus and build strength by shifting the body’s center of gravity. The objective is balance without stability. My writing addresses opposing tension in our world, and my attempt to find balance through understanding that opposition. During 2015-2106 I am cycling through all 48 mainland United States and asking the question "How will we live tomorrow?" That journey is chronicled in a dedicated blog, www.howwillwelivetomorrw.com, that includes personal writing related to my adventure as well as others' responses to my question. Thank you for visiting.
View all posts by paulefallon →
This entry was posted in Bicycle Trip Log and tagged Charleston SC, Del Webb Charleston, North Charleston, Sun City AZ, The Citadel. Bookmark the permalink.