“I don’t aspire to live a safe, comfortable, suburban life.” Andrew Umentum is a lanky Midwestern graduate from University of Wisconsin – Madison. When he began working for National Geographic as a cartographer he lived in College Park, but moved to neighboring Mount Rainier because he liked the vibe of a place with a Food Coop and a Bike Coop. “It’s poorer than DC or Northwest, but more diverse.” He lives in a second floor apartment in an old house, but is soon moving to a group house that he hopes will be an urban demonstration project of life off the grid.

Andrew’s living room walls are full of maps, an antique map of Lake Winnebago, Wisconsin; a bird’s eye view of his hometown, Green Bay; a topographic map of the District of Columbia; and a phantasmagorical vision of Mesoamerica. But the coolest map – the one that changed Andrew’s life – is ‘The Road from Madison.’ 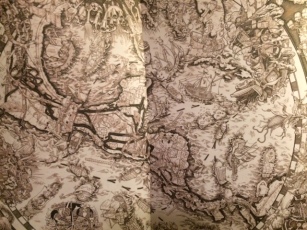 Andrew has completed several bicycle tours. The longest was Madison to New Orleans to Detroit and back to Madison: 4,706 miles over five months with two companions. Andrew created a map of their route for a Senior Thesis project; a gorgeous work of art that won him an internship at National Geographic and was published in Atlas of Design Volume 2 (NACIS, National Cartographic Information Society, 2014). 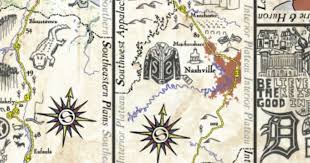 “I wanted to create a map with a soul that illustrated the beauty and chaos of the road. The typical road atlas has sanitized the landscape and sucked all life out of place, which I believe has a direct impact on the degradation and homogenization of culture. As Americas, we constantly define place and ourselves based on arbitrary boundaries of statehood, and continue to ignore the land and people that truly differentiate this country.”

“Part of my Catholic upbringing included service. I spent time in the Dominican Republic as a teenager. I thought their culture was spiritually rich, if not materially rich. We need stronger spiritual connections.

“Bikes can do so much for us. They can lead the restructuring of our urban infrastructure. They can also help you so much as an individual. Go at your own pace; build your confidence. In every other form of transportation you are helpless, waiting passively for something outside of you to move. The energy I put into the bike coop helps people to access bicycles. Not everyone is mechanical. Bicycles are a metaphor for where we need to go: power ourselves.

“You are a political statement. How you live is how you vote every day for how you want to live. I want to be able to live your question; to live cooperatively, to live off the grid, and then expand that to the neighborhood and the city.

“I would like less of a divide between citizens and government. I think police need to live in the communities they serve. Now, they show up, armed, and automatically escalate any situation. They are the government enforcing its will by fear. Police are on the frontline of enforcing our politics, allowing protest but drawing a solid armed line between the protestors from everyone else.”

“Scale is a huge question. As a cartographer I think a lot about scale. We need to be able to make change at a local level.

“We need to be dedicated to the art of work. I’ve done HelpX and Woofing. People say its indentured servitude, but they’re taught me how to do manual labor and get satisfaction from it. Not everyone needs to know how to fix everything, but it’s empowering if you can do something. There’s this progression that we’re supposed to follow. Our grandfathers’ did manual labor and we’re supposed to seek sitting back at a desk and making decisions. I don’t think that’s a good way to go.

“Right now I come home at night and sit in the apartment I pay rent on; I don’t have to do anything to keep it running. When I move into the coop I will be responsible for making it work. I want to make it work, and make it an example for the neighborhood, for the city, of a different way to live.

“How will we live tomorrow? Through action. Start today.”

Greetings reader. I am a writer, architect, cyclist and father from Cambridge, MA. My primary blog, theawkwardpose.com is an archive of all my published writing. The title refers to a sequence of three yoga positions that increase focus and build strength by shifting the body’s center of gravity. The objective is balance without stability. My writing addresses opposing tension in our world, and my attempt to find balance through understanding that opposition. During 2015-2106 I am cycling through all 48 mainland United States and asking the question "How will we live tomorrow?" That journey is chronicled in a dedicated blog, www.howwillwelivetomorrw.com, that includes personal writing related to my adventure as well as others' responses to my question. Thank you for visiting.
View all posts by paulefallon →
This entry was posted in Responses and tagged Andrew Umentum. National Geographic, Atlas of Design Volume 2, Mount Rainier Bike Coop, Mount Rainier MD, The Road to Madison. Bookmark the permalink.