In 1710, the King of England appointed Alexander Spotswood Lieutenant Governor of Virginia. In order to explore and settle the frontier, Spotswood brought two large groups of German indentured servants (1714 and 1717) who worked seven years and were then granted homesteads along the foothills of the Blue Ridge Mountains, a dangerous frontier tight to Native Americans.

Kathy Ellis is not prone to simple stories or quick answers, which is why describing how she came to live in the Virginia Piedmont begins over 300 years ago, accompanied by numerous maps and gestures. Kathy is fascinated with history. The tangential influences of geography, politics, and culture meander through her stories with the same ease that the Hazel River wanders along the edge of Clifton Farm, the family homestead that Kathy’s ancestors, descendent from those indentured Germans, founded over 170 years ago.

Kathy is the fifth generation Crigler to live at Clifton Farm. She and her husband Robert moved here more than a decade ago after retiring from their respective work in public health and civil engineering. As Robert puts it, “We either had to take a match to it or preserve it.” They are both glad they chose the later, more challenging course.

The main house is a ‘side entry’ representative of many Germanic houses in the area. The original 1845 structure features a generous stair hall and one large room on each floor: a basement dining room, a main floor bedchamber, second floor combination bedchamber / school room, and third floor sleeping loft. Separate buildings beyond the main house included a kitchen with slave quarters above, wood shed, smoke house, meat house, ash room, and – last in line but not least – the privy. 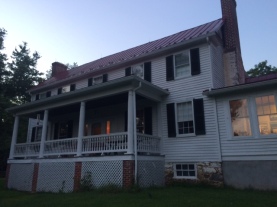 By 1860 the property supported a large family plus nine slaves. The Crigler’s added the ‘second side’ to the main house, turning it into a center entrance home. The farm was pillaged in the Civil War. The Crigler’s filed for bankruptcy in the Panic of 1873 but managed to keep the place and gain prosperity.

In 1910 they enlarged the house again, creating a ‘T’ building with a second stair and updating much of the building with Arts and Crafts woodwork popular at the time. The farm was prosperous through most of the 20th century, but by the time Kathy’s parents died there were only two heirs, neither of whom resided here.

Kathy and Robert undertook extensive renovations and a fourth addition in 2007, updating all the services, reconstructing the kitchen and stabilizing other outbuildings. Today Clifton Farm is a beautifully restored property listed on the Registry of Historic Places. Kathy and Robert live in one portion of the house; the original areas are kept for tours and lucky guests like me. They maintain the immediate grounds and gardens (where they grow the best cucumbers I’ve ever tasted) and lease the remaining 300+ acres to local farmers.

Kathy’s stories fill every room along with the family portraits and antiques. Tales of cooks and confederates, former slaves and present friendships with their descendants. The past seems so alive to her, the wounds of the Civil War remarkably fresh. “There was a dance of etiquette between the races. A desire for order that is gone.” 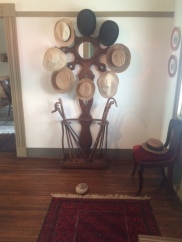 Although I appreciate Kathy and Robert’s responses to my question, I longed to pose it to the house itself, to learn what hopes and fears lay in these old bones and new appliances. The house has never been so polished and grand. It is capable of embracing a large family, even a community. Will Kathy and Robert’ two sons, now in Oklahoma and Alaska, return to their roots as their parents did? Will this incredible property find a new, larger life in its tomorrow?

“What is tomorrow? My tomorrow is going to be pretty similar to my today. I would hope to live smarter; that something I’ve learned today I can use tomorrow. I hope I’ve done something that people will want to come to my funeral.” – Robert

“Being an agricultural community, you make decisions every day that influence the land you are steward of. You try to take care of it.” – Kathy

After this profile was published, Kathy sent me the following additional information about the farm, their restoration efforts, and its relevance for today and tomorrow:

How will we live tomorrow? We consider climate change, safe food production, and race relations priority challenges of the future, and we have worked hard to use this farm to give context and offer some answers to all three.

(1) 150 years ago, this farm was essentially self-supporting in energy, clothing, and food. In 2016, we do the best we can to reduce our use of resources, recycle everything we can, and added solar photovoltaic panels that provide our own daily energy use as well as adding some back into the grid.

(2) We have used farm programs to reduce runoff into the Chesapeake Bay tributaries which surround the house. We research any materials added to the land for productivity and try to make responsible decisions as stewards of the land that will maintain its health centuries into the future.

(3) We have done everything we can to research the history and to honor both enslaved and free workers who were here. We have allowed African American artists and film makers, re-enactors from the Civil War U. S. Colored Troops to use it. In 2013, we received the William H. Carney “Trail to Freedom” award for our efforts.

We tried to restore the farm accurately because that is the only way to tell its story accurately. The Criglers, arriving as indentured servants in 1717, had been persecuted for religious beliefs in Germany. When they finally owned a house and farm here in Virginia, they lived with hard work, faith, frugality: there were no crystal chandeliers, cut glass wine decanters, or silver service tea sets here.

We do not “celebrate” the Civil War here  but see it as a reminder of the violence that we Americans were capable of inflicting on each other. And the fact exists that we all (North and South) benefited from labor from people enslaved because of their skin color. A friend once said that the best reparations for the past are to live for peace and justice today; can you imagine our world today if everyone who benefitted from slavery did that? We feel that at Clifton farm, we have a unique ability to open that discussion on many levels–and that is part of how we try to make a tomorrow a better place.

In the politically tense time in which we live, it is very, very important to remember all these things.

Greetings reader. I am a writer, architect, cyclist and father from Cambridge, MA. My primary blog, theawkwardpose.com is an archive of all my published writing. The title refers to a sequence of three yoga positions that increase focus and build strength by shifting the body’s center of gravity. The objective is balance without stability. My writing addresses opposing tension in our world, and my attempt to find balance through understanding that opposition. During 2015-2106 I am cycling through all 48 mainland United States and asking the question "How will we live tomorrow?" That journey is chronicled in a dedicated blog, www.howwillwelivetomorrw.com, that includes personal writing related to my adventure as well as others' responses to my question. Thank you for visiting.
View all posts by paulefallon →
This entry was posted in Responses and tagged Clifton Farm, Kathy Ellis, Rixeyville VA. Bookmark the permalink.