When is a pile a rocks just a pile of rocks? When does it have deeper significance? Perhaps it is a section of stonewall that separated colonial farms. Perhaps it is the remnant of a building foundation. Or perhaps it is part of a Native American spiritual site. Curtiss Hoffman, archeology professor at Bridgewater State University in Massachusetts, travels throughout the Southeast documenting known Native American spiritual sites in order to help evaluate the likelihood that newfound sites have significance to Native Americans. “Stories are passed down about these places, but I’m trying to add some science, which is useful in obtaining recognition and preservation.”

Curtiss has documented hundreds of sites in South Carolina and Georgia. “One thing I’ve learned is that sacred sites were often places where water flows in two directions.” Stone formations where rivers diverge are more likely to be Native American sites. Curtiss is perplexed by the theories some people espouse in order to minimize Native America claims. “One colonial historian suggested that when better farm land became available further west, local famers invited people to ‘stone bees’ to create decorative stonework’s to make their farms more attractive. Although there are many documented ‘stone bees’ to build churches and public buildings, there is nothing that suggests people did it to beautify farms.” Another favorite from a former state archeologist of Connecticut: stones naturally rolled downhill and formed piles. “How did the stones climb up those piles?” 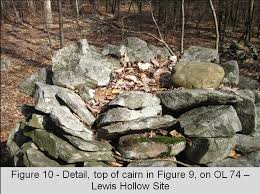 Curtiss’ work is unlikely to ‘prove’ that any given stone assembly is, in fact, a Native American spiritual site. He is simply applying scientific method that may, or may not, bolster Native American claims; claims that, in their culture, are usually founded on different ways of tracking truth.

“I think we’re going to have to come to terms with the reality that we are a global community. Every culture’s traditions need to be respected, which does not mean they have to be accommodated. We have to find our place on this small planet: take care of this earth; take care of each other; and be kind to each other.”

Greetings reader. I am a writer, architect, cyclist and father from Cambridge, MA. My primary blog, theawkwardpose.com is an archive of all my published writing. The title refers to a sequence of three yoga positions that increase focus and build strength by shifting the body’s center of gravity. The objective is balance without stability. My writing addresses opposing tension in our world, and my attempt to find balance through understanding that opposition. During 2015-2106 I am cycling through all 48 mainland United States and asking the question "How will we live tomorrow?" That journey is chronicled in a dedicated blog, www.howwillwelivetomorrw.com, that includes personal writing related to my adventure as well as others' responses to my question. Thank you for visiting.
View all posts by paulefallon →
This entry was posted in Responses and tagged archeology, Bridgewater State University, Curtiss Hoffman, Native American spiritual site. Bookmark the permalink.