Rosalie Gould has striking grey hair, perfectly cut, clear skin and strong features. She is a handsome woman for any age. At 91, Rosalie Gould is a marvel.

Rosalie’s family emigrated to the Arkansas delta from Italy in 1895 when a priest brought twenty families to Lake Village to build the railroads. When she was six her father moved the family to a farm in Tillar, where the other school children had never seen an Italian or a Catholic.

Rosalie married a man with a heart defect. In 1955, news of an innovative surgery drew them to Johns Hopkins in Baltimore. Rosalie figures the procedure gave him ten more years, though he died in 1965, leaving her with three children and a farm in Rowher, near site of the former World War II Japanese-American Internment Camp.. “Joe bought 1,000 acres of good land three months before he died. We cleared it ourselves. I’ve just been working all my life. I’ve had some downs, but if anyone hears me complain, they can wallop me upside the head.”

Rosalie moved the children to the nearest big town, McGehee, and got involved in that community. In 1976 she met the young man running for Attorney General, Bill Clinton. “When you talk to Bill you think he’s the smartest man in the world. Then you turn around and think, now what was that about?” The two have enjoyed a long relationship; Rosalie considers him a friend.

In 1983 her daughter Lie suggested Rosalie might enjoy being mayor. It seemed a fun idea. Rosalie filed the papers, ran against “three fine men” in the election and won. “I enjoyed it, but I got in a lot of trouble. We had a police force that was not the best; they didn’t like me.” But the voters liked her. Rosalie served until 1995.

During Rosalie’s tenure, the monument at the Internment Camp up in Rowher was not well tended, so she sent a maintenance crew up there every so often. She began hosting Japanese-American visitors for lunch. They gave her keepsakes from the camp, including artwork created by the internees. Rosalie was impressed by these quiet people. “They do not hold anything against the government. They lost face because they were considered traitors. I tell them they should stand up and say, ‘Yes, we were in the camps, that was our part in winning the war.’ I have learned so much from these people and their outlook on life.”

In 1989, after the railroad consolidated and the depot sat empty, Rosalie suggested the town turn it into a museum about the interment camps. The people of the Delta were not ready for that. Rosalie received hate mail, even death threats. But she continued to champion the idea of honoring the Japanese-Americans who lived in the Delta against their will. 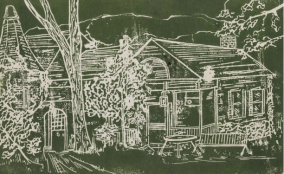 Time passes. Rosalie’s art collection was appraised at over $1 million. She donated it to the Butler Center for Arkansas Studies in Little Rock with one stipulation. “Any time any descendent of any internee visits, he can see and hold any piece in the collection.”

Money gets appropriated. Three years ago, McGehee turned the depot into a museum honoring the two intern camps in Arkansas.

But not all wounds heal. Rosalie will not allow any of the art entrusted to her to be displayed in McGehee. She speaks highly of the effort, though she’s never stepped foot inside the museum. I am confident she never will.

“When we make mistakes, atone and learn from it.” That is what Rosalie learned from Japanese-American Intern camp descendants. But it is difficult to apply to the hate she received from her own neighbors.

“I have a dim view of what’s going to happen. I’m 91 years old. The two or three generations after me are the ‘me’ generation. They want instant gratification. First, they want a nice house, lots of stuff, and when that doesn’t satisfy they pick up marijuana. They are not satisfied.

“Last year I was asked to speak to the seventh and eight grade. Half of the children were asleep, the other half on their phones. I quit talking and left.

“There are good things. Some young people are giving their lives to help others. They are a ray of sunshine.”

Greetings reader. I am a writer, architect, cyclist and father from Cambridge, MA. My primary blog, theawkwardpose.com is an archive of all my published writing. The title refers to a sequence of three yoga positions that increase focus and build strength by shifting the body’s center of gravity. The objective is balance without stability. My writing addresses opposing tension in our world, and my attempt to find balance through understanding that opposition. During 2015-2106 I am cycling through all 48 mainland United States and asking the question "How will we live tomorrow?" That journey is chronicled in a dedicated blog, www.howwillwelivetomorrw.com, that includes personal writing related to my adventure as well as others' responses to my question. Thank you for visiting.
View all posts by paulefallon →
This entry was posted in Responses and tagged Butler Center for Arkansas Studies, McGehee AR, Rosalie Gould, Rowher Internment Camp. Bookmark the permalink.