Before Adam Collier took me out on the town and introduced me to the Bacchanalian delights of Ms. Newby’s bar, we leafed through The Universe, a super-size coffee table book of photos of our galaxy and beyond. Adam purchased the book for $19.99 back in high school and carted it from his hometown of Sarasota, to FIT for degrees in oceanography and engineering management, then on to Groton CT where he worked in nuclear submarine design. “Those projects were going to take thirty years to bring to life. It was my first job. I was not ready to make that commitment.” After six months in Connecticut Adam came to Panama City, where he designs life support systems at NAVSEA for Navy divers. “They tell me it can take two to three years to get the parameters of what we design, but after four months I already like it.” 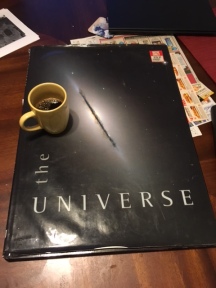 Adam’s technical bent is balanced by a counter-cultural, spiritual vibe. He’s mostly vegetarian, practices yoga, campaigns against tossing cigarette butts, intones the didgeridoo he hand crafted, and studies Eastern religions. “People ask me all the time if I’m from California.”

Like all good sons of the South, Adam is well versed in the The Bible, a subject I never tire of discussing with people across our land. He explained how, even though he’s no longer a strict believer, The Bible is still holds a unique position among texts. “Shakespeare may be inspired writing, but it doesn’t have near the scope of The Bible. The Bible tells a great story and it outlines how we are supposed to live and it describes a future. If you believe in it, it includes everything you need to know.” 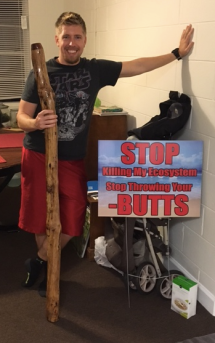 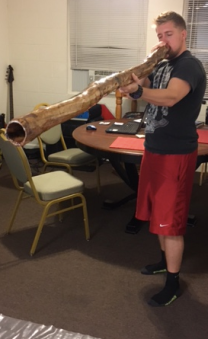 But even the scope of The Bible falls short of the magnificence Adam and I encounter in The Universe. Humans are simultaneously insignificant among the stars and remarkable in all that we can conceive. As we contemplated bursting nebulae and collapsing galaxies Adam looked beyond Christianity’s primary text. “Ancient Buddhists believed that the sky was filled with gods that expanded and then contracted to sleep. How did they know that?”

“I was just watching Cosmos. We have to have something dramatic to force ourselves to reevaluate how we live. We will have to have a disaster to take us to the fundamentals so we can start from scratch and restructure society from the ground up. By then I hope we will be living on other planets. I’m hoping to be part of that transition. I want to be an astronaut; I am getting there by first being an argonaut. I give us two generations until we live in space.

“Commercialization is powerful. Why do so many people thank we need so much stuff? I haven’t had a TV in six years. I watched too much as a kid. I fear addictions; I was addicted to TV. Someone asked me my biggest fear and I said, ‘dying before I make an impact on the world.’ But really, I’m afraid of an addiction. Actually, my biggest fear is a bar of soap. I figure it’s because my mom put one in my mouth when I was a kid. I cannot stand to touch a bar of soap.”

Greetings reader. I am a writer, architect, cyclist and father from Cambridge, MA. My primary blog, theawkwardpose.com is an archive of all my published writing. The title refers to a sequence of three yoga positions that increase focus and build strength by shifting the body’s center of gravity. The objective is balance without stability. My writing addresses opposing tension in our world, and my attempt to find balance through understanding that opposition. During 2015-2106 I am cycling through all 48 mainland United States and asking the question "How will we live tomorrow?" That journey is chronicled in a dedicated blog, www.howwillwelivetomorrw.com, that includes personal writing related to my adventure as well as others' responses to my question. Thank you for visiting.
View all posts by paulefallon →
This entry was posted in Responses and tagged Adam Collier, Cosmos, Ms. Newby's, NAVSEA, navy divers, Panama City Beach FL, Panama City FL. Bookmark the permalink.