Aiden Sewall studied graphic design at John Brown University in Siloam Springs, but has spent his adult life in education and missionary service. He taught English for five years in Vietnam, then two years in Cambodia. In Dubai Aiden worked among the South Asian immigrants who fuel that bustling emirate. “It wasn’t strictly missionary work. We were providing social services to those in need in Jesus’ name.”

Now Aiden lives in Fayetteville with two apartment mates in a complex that caters to students. He has complied his travel memoirs into books and works for Global Outfitters, an outreach arm of New Heights Church, a local church with a mission of service. Other New Heights initiatives include running a local coffee shop to support a Guatemalan orphanage, a support group for people with disabilities, obtaining refugee center status for Fayetteville, and sponsoring the city’s first re 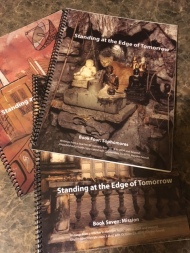 fugee family from Sierra Leone: people who have never lived outside a refugee camp.

New Heights Church strikes a middle road in terms of politics and ideology, creating a large tent for Christians interested in doing service in Jesus’ name. It is unusual among churches in that it eschews owning property. When the congregation, which meets in the Fayetteville Boy’s Club, outgrew the gym where they meet on Sundays, they funded an expansion of the Boy’s Club rather than build their own facility. “Church should be based on community. The buzzword is that we’re an Acts 2 church, based on the book of Acts, Chapter 2 in The Bible.” 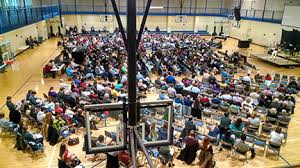 Aiden, age 41 and single, is dedicated to living his faith, but he is not a minister. “I function as a chaplain rather than as a preacher. I am better at consulting. I have a strong personal faith and global point of view. I want to be a good representative of my faith, but not dogmatic.” 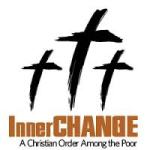 Aiden grew up in a Little Rock family he describes as, “straight GOP.” Then he discovered innerCHANGE.org, a Christian order that works among the poor, and his perceptions changed. “Undocumented workers are a theological issue. Are national borders god-made or man-made? If they are man-made then must people of God be bound by them?”

Aiden looks forward to a time of universal governance (unlike many fundamentalist who view that as a condition leading to the Antichrist). According to Aiden, there are 83,000 different Christian denominations throughout the world, whose shared principals are few. “There is a passage where Jesus prays for unity, but with 83,000 differences, and other religions, that unity is hard to find.”

“We can answer that in so many ways. It is not just the good overtaking the bad. My faith shows that will happen when people live as decent humans. But it cannot happen without Jesus. His love is contagious. I believe it can expand to encompass the earth.

“You think there’s all this unity, and then there’s Donald. Trump. So it’s a spiral. People don’t learn from history, but I believe we can spiral up. Our survival as a human race has a lot to do with each other. We all know there’s more to life in two than in one. Jesus knows that. His branding is that all who love Him know and love each other.

“We have confidence, as Christians, in the future.”

Greetings reader. I am a writer, architect, cyclist and father from Cambridge, MA. My primary blog, theawkwardpose.com is an archive of all my published writing. The title refers to a sequence of three yoga positions that increase focus and build strength by shifting the body’s center of gravity. The objective is balance without stability. My writing addresses opposing tension in our world, and my attempt to find balance through understanding that opposition. During 2015-2106 I am cycling through all 48 mainland United States and asking the question "How will we live tomorrow?" That journey is chronicled in a dedicated blog, www.howwillwelivetomorrw.com, that includes personal writing related to my adventure as well as others' responses to my question. Thank you for visiting.
View all posts by paulefallon →
This entry was posted in Responses and tagged Fayetteville AR, Global Outfitters, New Heights Church. Bookmark the permalink.