I woke early and climbed, climbed, climbed out of the Mississippi River Valley to the high plateau that is Iowa. Monona didn’t offer much for breakfast, so I had a snack and pedaled in the narrow zone between the rumble strip and the gravel on to Postville. I didn’t expect much more in this sleepy town on a Sunday morning, but was intrigued by the highway sign’s hyperbole proclaiming Postville, ‘Hometown to the World’. 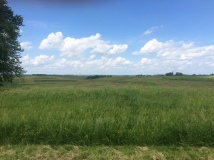 Main Street looked shut tight until I noticed lights in Glatt’s Supermarket. I entered the store. An Orthodox Jewish woman carrying a baby stood at the register; three small children popped their heads out of the next room to see the strange, bright man. I opened a soft drink and asked about Postville’s ‘Hometown to the World’ slogan. Shaindy Glatt explained that people from all over the world lived in Postville – Orthodox Jews, Ukrainians, Somalis, Mexicans, Germans, Russians, Hispanics – mostly due to the world’s largest Kosher slaughterhouse located there. Her description triggered a news flash. “Is this the place.” “Yes,” I didn’t need to finish; “this is the place where there was the big immigration raid occurred a few years ago.” From Shaindy’s perspective, the raid was overblown, and the resulting justice unfair. The Orthodox Jewish plant manager got 27 years to life in prison, while the banker in cahoots got a wrist slap and a fine. “Before the raid, everyone got along. We had festivals with tents and everyone had their respective foods. We haven’t had that since, although things are getting better, slowly.” 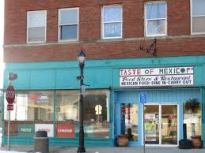 I left Glatt’s and discovered a Mexican cantina on the main corner, settled in to write through the hottest part of the day and had fantastic fajitas for $6.95. My Mexican waitresses kept my water glass and chip basket full, but they didn’t venture into the politics of Postville. Later, however, a man of German descent took a different tack from Shaindy Glatt. “What that guy did was inhumane, working people in slave conditions.”

Since it was Flag Day, and I was in Iowa, in a melting pot no less, I decided to fulfill my promise to contact all the candidates running for President in 2016 and ask them my question. It took a few hours to figure out a comprehensive list, navigate their online personas, and determine how to best contact each one.

Based on web searches alone, I made a few observations:

After noting the ‘not yet official candidates (I’ll ask Jeb in a day or two after his hoopla settles), I cycled 20 miles past beautiful farms where all the cows turned their heads to watch me pass, and small towns where the local folks sitting under the canvas tents set up in front of their garages did the same. I passed a parade of old tractors and another of vintage autos. Cycling on a Sunday requires a lot of waving. In Calmar I shifted to the bike path to Cresco. I don’t know why the bike path is paved while the adjacent county road is dirt. For once I got a smoother ride than the pick-ups along my side.

Cresco, like so many Iowa towns, could have been the setting for The Music Man. Harold Hill could parade along the wide main street with its rows of American flags. Marian would be quite at home in the stately public library on North Elm Street, the town’s most prosperous. My warmshowers host, Duane, offered me a tasty Greek salad and a beer, good conversation, and a welcome bed.

Greetings reader. I am a writer, architect, cyclist and father from Cambridge, MA. My primary blog, theawkwardpose.com is an archive of all my published writing. The title refers to a sequence of three yoga positions that increase focus and build strength by shifting the body’s center of gravity. The objective is balance without stability. My writing addresses opposing tension in our world, and my attempt to find balance through understanding that opposition. During 2015-2106 I am cycling through all 48 mainland United States and asking the question "How will we live tomorrow?" That journey is chronicled in a dedicated blog, www.howwillwelivetomorrw.com, that includes personal writing related to my adventure as well as others' responses to my question. Thank you for visiting.
View all posts by paulefallon →
This entry was posted in Bicycle Trip Log and tagged 2016 Presidential candidates, A Taste of Mexico, Cresco IA, Cresco Public Library, Glatt's Supermarket, Postville IA. Bookmark the permalink.