Bob Layo, Executive Director of the Johnstown, PA Chamber of Commerce has a tough job. Johnstown, PA is best known for three horrific floods. The 1889 flood killed 2,209 people, the single highest day of civilian disaster deaths until September 11, 2001. The 1936 flood led to an extension of WPA disaster relief and Pennsylvania instituting a ‘disaster relief’ tax on newly legal alcohol. The city was a steel making behemoth; the Bessemer process was invented here, the company that became Bethlehem Steel originated here, and at one time Johnstown was the largest steel-producing town in the world. After each of these floods, Johnstown’s industrial base returned.

However, the steel business was already deteriorating when a third major flood hit in 1977, from which the city has never recovered. Johnstown has lost population for the past nine decades, and CNN Money recently named it one of the Seven Fastest Shrinking Cities. Still, it is home to over 20,000 people and has a solid urban core. I knew that Bob would have a positive spin on what tomorrow might look like in Johnstown, and he has valuable insights.

“After the 1977 flood our unemployment rate hit 25%, which was higher than it had been during the Depression. Our homegrown industries, which had been struggling, pulled out. The key to our survival was a very strong Congressman (John Murtha) who helped bring defense-related industry to our area.”

A number of defense manufacturers have created plants in and around Johnstown. There are also a few foundries, specialty milling operations, and a wire factory, utilizing a portion of the mighty plants that occupy the east side of town. The largest employer in town, as in many small cities, is the local hospital. Last year it was bought by Duke LifePoint, and according to Bob it’s too soon to see how becoming a for-profit entity has affected the operation, though it has been making a consistent profit. Both UPMC (University of Pittsburgh Medical Center) and Highmark Blue Shield have presences in Johnstown, so the healthcare sector is solid.

Bob described how Chamber of Commerce activities in Johnstown were similar other areas. “We provide business information, though these days most of that is done electronically. It all comes down to networking. The Chamber sponsors a variety of different opportunities for people to meet and learn about business opportunities – a Showcase for Commerce, an Economic Summit on future trends and leadership programs for executives and entrepreneurs.

When I ask how Johnstown positions itself for the future, Bob replied that the regions biggest assets are its natural beauty, resources and water. The water capacity, designed for a larger population and more robust manufacturing, is now being tapped for recreational use, like creating white water rapids opportunities. Pittsburgh, just an hour away, has revitalized in impressive ways. The Chamber is working with entrepreneurial programs at Pitt and Carnegie Mellon to help young people consider the opportunities that we have here. “We have the recreational opportunities that young people want. What we need are family sustaining jobs.”

“I have an array of answers. Pennsylvania is naturally beautiful; you’ve seen that on your bike. Western Pennsylvania has a unique lifestyle, long history and rich traditions. The state as a whole is stable, but the population is shifting away from older cites, toward the larger cities and to sprawl. We have to find new uses for our existing communities.

“We have many colleges within a short distance of Johnstown, but young people don’t realize that it’s a great place, an entrepreneurial place, t 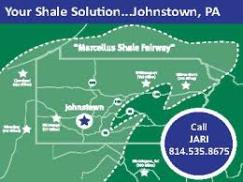 o live. That is one of the byproducts that I hope will result from this oil and gas boom. We are sitting right on the Marcellus Shale. Now, I’m no expert on this, but I understand that there is a deeper, even larger formation of ‘wet gases’ that lie below that, gases that are particularly well suited to different industrial processes. If we have the energy here, and we have the lifestyle here, we can have a strong economic base again.”

Greetings reader. I am a writer, architect, cyclist and father from Cambridge, MA. My primary blog, theawkwardpose.com is an archive of all my published writing. The title refers to a sequence of three yoga positions that increase focus and build strength by shifting the body’s center of gravity. The objective is balance without stability. My writing addresses opposing tension in our world, and my attempt to find balance through understanding that opposition. During 2015-2106 I am cycling through all 48 mainland United States and asking the question "How will we live tomorrow?" That journey is chronicled in a dedicated blog, www.howwillwelivetomorrw.com, that includes personal writing related to my adventure as well as others' responses to my question. Thank you for visiting.
View all posts by paulefallon →
This entry was posted in Responses and tagged Johnstown Chamber of Commerce, Johnstown floods, Johnstown PA, Robert Layo. Bookmark the permalink.