Dr. Robert Smith is one of the founders of Alcoholics Anonymous, which began in Akron in 1935. Dr. Bob died in 1950, and his home turned over twelve times, eventually becoming a fraternity house, until a non-profit foundation purchased the house in 1984 to preserve it. Dr. Bob’s House received National Historic Landmark designation in 2012.

The house is open 364 days a year. Volunteers do all the maintenance and provide 15 to 20 tours a day. During Founder’s Week, in early June, 20,000 people visit Akron to participate. When I ascended the twelve steps to the house on a hot Friday afternoon, a group of volunteers were landscaping the garden. Inside, Wayne Beck gave me a private tour.

Wayne, 59, is a graphic designer with a trio of sparkling earrings who’s been a volunteer for the past five years. He lost permanent employment prior to recovering from alcoholism. Volunteering helps him focus on the program and gives him valuable experience while he seeks a full time position. 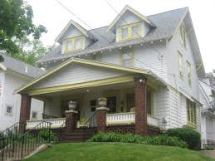 Dr. Bob’s house was built in 1915, on a brick paved side street when Akron was emerging as the Rubber Capital of the World. It is a straightforward two-story structure with wide front porch, Mission-style gumwood trim, and well-proportioned, modest rooms. In the Inglenook end of the living room, the Bible on display is open to Annie Smith’s favorite Bible verse, James Chapter 2, verse 17: Faith without works is death.

Wayne augments Dr. Bob’s story with personal vignette, which seems appropriate since AA is a confessional program. People learn to trust others and lean on them rather than their addiction. “My brother came to me and asked ‘Am I an alcoholic?’ His four-year-old daughter had given him shot glasses as a Christmas gift, which he took as a hint. “Of course, I said, ‘it’s not for me to say, but if you have to ask the question, you probably know the answer.’ Alcoholism is genetic, it runs in our family.” Wayne’s grandfather died from alcoholism, and his nephew recently got his second DUI.

In one of the second floor bedrooms, Wayne points out a medical bag that Dr. Bob supposedly carried on his last binge. “We celebrate June 10 as Dr. Bob’s sobriety date, but the train trip that triggered that last binge happened in late June. Our history is a little fuzzy, which makes sense, since we’re all alcoholics.”

Another bedroom is known as the surrender room, where visitors often recite the third step of AA’s 12 steps: Made a decision to turn our will and our lives over to the care of God as we understood him. Wayne stepped away. I spent a few minutes contemplating how alcoholism has affected my own family: alcoholic grandparents whom I never met, an alcoholic father who was so vital and generous, expect when he wasn’t. Dr. Bob’s brilliant program has helped millions directly, and even more indirectly.

By the time I returned to the kitchen, where cookies and coffee are set out for anyone who wishes, Wayne shared what I already intuited. “Looking back, I knew who I was when I was 16. A friend of mine and I wore long coats with interior pockets, into a local store. He took a Playboy, I took a bottle of cheap booze. We went to the woods with our stash. I couldn’t understand his fascination with the tits, but I drank the entire bottle. I was born an alcoholic. I was born gay. I was baptized a Christian. That is who I am.”

“I am still bringing myself up to speed. What I hope to do tomorrow is work full time in my field.”

Greetings reader. I am a writer, architect, cyclist and father from Cambridge, MA. My primary blog, theawkwardpose.com is an archive of all my published writing. The title refers to a sequence of three yoga positions that increase focus and build strength by shifting the body’s center of gravity. The objective is balance without stability. My writing addresses opposing tension in our world, and my attempt to find balance through understanding that opposition. During 2015-2106 I am cycling through all 48 mainland United States and asking the question "How will we live tomorrow?" That journey is chronicled in a dedicated blog, www.howwillwelivetomorrw.com, that includes personal writing related to my adventure as well as others' responses to my question. Thank you for visiting.
View all posts by paulefallon →
This entry was posted in Responses and tagged AA, Akron OH, Dr. Bob's House. Bookmark the permalink.