One quarter of the population of Sweden left the country during the famine of the late 1800’s. More than half of them arrived in Turner Falls, MN and eventually to Minneapolis. Although one in eight returned to the hardships they knew rather than face the ones in this country, those who remained made Minneapolis the Swedish hub of America. Like all immigrant communities, Swedes started at the bottom of the social and economic ladder. But one man, Swan Turnblad, refused to accept that place. He built a newspaper empire and built a mansion in 1908 on Park Avenue, Minneapolis’ first paved street, to proclaim that Swedes had arrived. 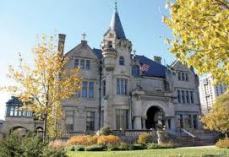 The mansion was a landmark and social statement from the start; Turnblad scarcely lived there. It became the headquarters of the American Swedish Institute in 1930 and for years was a historic house museum. Fifteen years ago ASI evaluated its mission and determined that they needed to both expand the museum campus and play a larger role it the wider Minneapolis community. The result is the Knolsen Cultural Center, a new building adjacent, and with a link to, the Turnblad mansion. The new building provides a new entrance, cafe, gift shop, and administrative center, as well as educational facility. This frees the house up to its original splendor and purpose as an architectural showcase.

Laura Cederberg, ASI Communications and Marketing Director, toured me through both facilities as she described the features of each, and the evolving face of the American Swedish Institute. “When everything was in the mansion, we were operating from the belly of the beast. The new building is a LEED Gold facility with the largest geothermal installation in Minnesota. There are 88 museums in Stockholm, and they all feature great restaurants. So we put special emphasis on our cafe, which is ranked the best lunch spot in Minneapolis. We had 29,000 visitors a year; now we have 150,000.”

The mansion is unusual among historic homes in that there is very little furniture, as the original furnishings were distributed elsewhere. However this allows the architectural features to show to full advantage. The woodcarvings of Swedish folk, imperial and American patriotic imagery took a artisans four years to complete. The eleven ceramic Swedish stoves are gorgeous. The mansion was the first building in Minnesota to be included on the National Register of Historic places. According to Laura, “The future of the mansion is ensured by the new building and the renewed interest it has generated.” 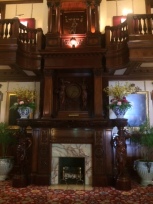 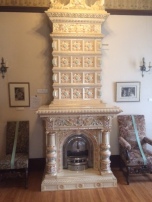 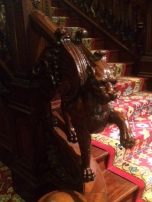 Laura also described the work ASI does beyond its campus. The perception of Swedes as a minority, let alone an oppressed one, has long faded. The Twin Cities have a strong Nordic identity more than a specific Swedish connection. And new immigrants are from all over the world. ASI takes the ‘Pippi Project’ into elementary schools to use Pippi’s stories of adventure as a springboard for similar stories from other cultures. In high schools they feature ‘story swaps’ where they compare and contrast stories by Swedish authors with those by immigrant writers.

“Collaboratively, collectively, and globally. That which is designed best will last longest. Everything we do is a value-add. We’ll all have to do this together.”

Greetings reader. I am a writer, architect, cyclist and father from Cambridge, MA. My primary blog, theawkwardpose.com is an archive of all my published writing. The title refers to a sequence of three yoga positions that increase focus and build strength by shifting the body’s center of gravity. The objective is balance without stability. My writing addresses opposing tension in our world, and my attempt to find balance through understanding that opposition. During 2015-2106 I am cycling through all 48 mainland United States and asking the question "How will we live tomorrow?" That journey is chronicled in a dedicated blog, www.howwillwelivetomorrw.com, that includes personal writing related to my adventure as well as others' responses to my question. Thank you for visiting.
View all posts by paulefallon →
This entry was posted in Responses and tagged American Swedish Institute, Knolsen Cultural Center, Laura Cederberg, Minneapolis MN, Turnblad Mansion. Bookmark the permalink.