I cannot guess whether this pilgrimage will make me a religious person, but I can attest that it will make me a more deeply spiritual one. The hand of fate continues to intervene on my behalf in ways that are too precipitous to dismiss.

Today I undertook the toughest ride of my journey, a near century from Denver to Copper Mountain that included 9,600 feet of elevation rise, including crossing the Continental Divide at Loveland Pass. I knew it would be difficult, but anxiety turned to excitement as I studied the route, set up sag options with my brother in the event of problems, and confirmed a good weather forecast.

I woke well rested at 5 a.m., ate a ridiculous breakfast (6 hard boiled eggs, two muffins, a bowl of grapes and a banana) and headed west before six. I had pedaled the first quarter of the route before – along Bear Creek through Morrison, and out old U.S. 40 to Genesee. I had also ridden the last quarter – from Keystone Ski resort to Copper Mountain on previous Courage Classic rides. But the middle half, and the most rise, was all new.

About ten miles in, near the Bear Creek reservoir, a a cheerful Christian on a training ride slowed down to talk with me. I gave him my card and asked my question. Recreational cyclists rarely stay with me for long; they are galloping stallions while I am burdened mule. Mark Weiler rode off but looped back a few minutes later.

I figured a few miles of scripture would pass the time. Besides, Mark is very handsome and triggered my gaydar, Bible notwithstanding. My gaydar was accurate, but the idea that Mark would tire of my pace after a few miles proved wrong by at least a factor of ten.

Mark and I spent nearly twelve hours together; he rode me all the way to the top of Loveland Pass. Eventually, I suggested he stop calling me Paul E. Fallon. Mark is a U.S. Post Office mail carrier and Air Force veteran. He’s married to a women he adores and has three sons. He is also gay. He is a born again Christian who was raised Catholic, and has followed Buddhism and Pantheism at other times in his life. He is the twelfth of fifteen children born to a pair of alcoholic parents; his father died at age 57 from liver disease and four of his siblings had early, tragic deaths related to the fallout of his dysfunctional family. He is devotee of Robert Bly and the Mankind Project. He was a depressed, TV-watching couch potato until God called him to rise above his origins. Now, he cycles 250 miles a week, lifts weights, belongs to a men’s group and a Bible-based church. Mark is a warrior on a bicycle and his training rides are his mission.

I could go on, because Mark did the lion’s share of talking during our hours together. In part because he is one of the most open, extroverted people I’ve met. But also because most of the time I was breathing too hard to form words, struggling to maintain a measly 4 mph as we climbed toward Loveland Pass.

Mark is a wonderful companion; a better diversion than my usual meditation. My pedaling took an uptick as he recited Psalm 19 at the top of his lungs and gestured his arms to the glory of God’s creation while we climbed toward Genesee. When I revealed, about three hours in, that I am also gay, it was clear that he was truly going to stay by my side through the climb. 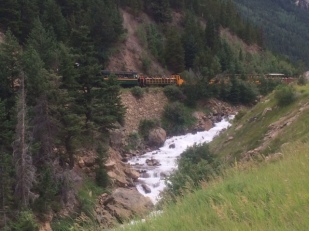 I bought us lunch in Georgetown and shared my plentiful snacks and water; Mark had not come out equipped for a seventy-mile climb. When we reached the base of Loveland Pass he called his wife, who agreed to pick him up later, then coached me up the four-mile trek to the summit. His life story unspooled with the rise. “I have never had so much time to tell someone my whole story; it’s great to reveal it all.” And, as often happens when someone opens their heart, I found myself confessing things I usually keep private. In the thrall of a one-day endorphin fueled platonic love affair, we exchanged all manner of secrets.

By the time we achieved the final stretch, Mark was literally looping circles around me; a light racing bike can hardly stay upright at the speed of a loaded Surly on an 8% grade. He alternated between reciting Corinthians Chapter 13 and giving me unflagging encouragement. “You are going to be the first man – ever – to climb Loveland Pass on a loaded bike in tennis shoes. Man, you are one weird cyclist.” 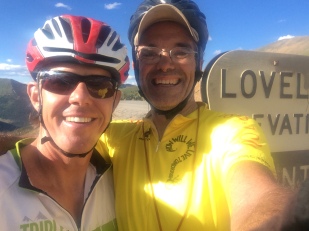 We reached the summit at 6:30 p.m., long past any other pedalers. We took photos, exchanged a tight hug and then headed off in opposite descents: Mark to his wife in Georgetown; me to my family beyond the Divide. Descending the Arapaho Basin into Keystone was one of the most beautiful rides I ever witnessed, even through glazy tears I could not control. Without Mark, I never would have completed this ride. Still, I was overwhelmed by what I had done. 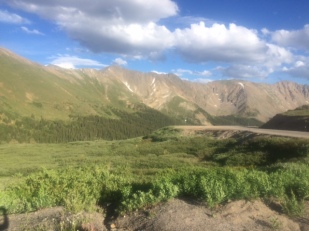 When world leveled out my legs were exhausted, but I wouldn’t accept a sag from my brother. I cycled along Dillon reservoir in sunset and reached the Copper Mountain bike path in twilight. I know this stretch well, and let the emerging stars guide me. I arrived at 9:30 p.m. after fourteen hours of cycling. Physically depleted but emotionally nourished.

Greetings reader. I am a writer, architect, cyclist and father from Cambridge, MA. My primary blog, theawkwardpose.com is an archive of all my published writing. The title refers to a sequence of three yoga positions that increase focus and build strength by shifting the body’s center of gravity. The objective is balance without stability. My writing addresses opposing tension in our world, and my attempt to find balance through understanding that opposition. During 2015-2106 I am cycling through all 48 mainland United States and asking the question "How will we live tomorrow?" That journey is chronicled in a dedicated blog, www.howwillwelivetomorrw.com, that includes personal writing related to my adventure as well as others' responses to my question. Thank you for visiting.
View all posts by paulefallon →
This entry was posted in Bicycle Trip Log and tagged Copper Mountain CO, Corinthians 13, Denver, Genesee CO, Georgetown CO, Loveland Pass, Mankind Project, Psalm 19, Robert Bly. Bookmark the permalink.