Back in the days of vinyl, I put Janis Joplin’s Greatest Hits on the turntable every Saturday morning and set the volume to 10 while I cleaned my apartment. I made my bed with ‘Me and My Bobby McGee,’ scrubbed the kitchen floor to ‘Piece of my Heart’ and top dusted to Janis’s version of ‘Summertime,’ the most searing rendition ever recorded of the world’s most popular cover. I read Buried Alive in college. So, when I came near the lonely lady’s birthplace, I pedaled to the far corner of Texas to visit Port Arthur, Janis Joplin’s hometown.

Downtown Port Arthur is not merely dead. The broken windows of the empty shells that line Proctor Street actually suck the life out of the occasional motor vehicle or wayward pedestrian. The most decrepit urban center I’ve encountered on my journey is a no man’s land, a haven for pigeons and seagulls to roost, a deChirico landscape below sea level. A place once throbbing with life – about the time Janice was coming of age – is now dead as the singer herself, and in it’s own way, just as tragic. 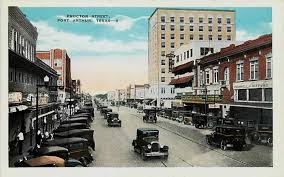 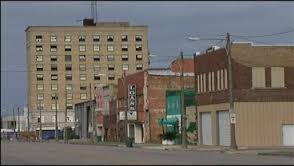 Smack in the center of the abandonment sits a former bank building, a mid century mausoleum to the capitalism that’s shifted away from the refinery fumes, to the higher ground and big box stores along the highway. The double door facing the street is locked. But around back, off the parking lot, is the entrance to the Museum of the Gulf Coast. I was the only visitor on a February Friday afternoon. Somehow, my communication with the staff had gotten confused. Stephanie Harren, Education Coordinator, forgot I was coming. Perhaps she never even knew the director palmed me off on her. Regardless, Stephanie gave me an insightful tour and shared personal insights about tomorrow.

The most striking element of the Museum of the Gulf Coast is a two-story mural covering the west wall of the main gallery. The largest indoor mural in Texas illustrates the region from prehistory to the present. Stephanie explained the museum’s mission; to present the geology, archaeology, history, art and culture of the Golden Triangle: Beaumont, Port Arthur, and Orange, Texas. “We take this area where things come together and tell its story. Houston marked the limit of the glaciers. This was a savanna where animals from the north and south converged.”

Stephanie is particularly keen on Cabeza de Vaca, who shipwrecked here in 1528, and proceeded to explore Texas; the same de Vaca that Andy Cloud told me about in Big Bend, 700 miles to the west. According to Stephanie, “He was an explorer, not a conquistador.”

Stephanie left me to wander the artifacts on my own: a fantastic confection of wooly mammoths, oil derricks, Fresnel lens’, stuffed alligators, fiberglass cars, Robert Rauschenburg abstractions, and homages to the popular musicians who herald from this sandbar of Texas swagger and southern charm. Although Janis occupies the prime corner of the second floor music gallery, she shares the spotlight with sixty other musical notables, including Percy Sledge, ZZ Top, Tex Ritter, Johnny Rivers, and the Boogie Kings. Oil and water mix well here to create music. 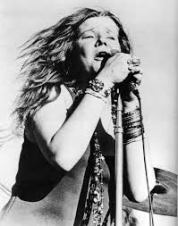 Stephanie found me a few minutes before closing. “Port Arthur was always a very progressive town. Now it’s dead.” When I asked what happened, she shrugged. “Life.” Then, Stephanie revealed an entirely different side; a divorced mother who’d homeschooled her children, explaining history as she thought it needed to be taught, until her ex-husband took her to court and gained custody due to her unconventional parenting. “The system needs to be disrupted; it took away my kids.”

“I don’t like the wording ‘we’ I can’t speak for ‘we.’ I wouldn’t want to speak for this community.

“Since coming here I’ve gotten very much into history. Why do we think the way we do? What drives us forward? We do amazing things but we have a dark side. We all have the same DNA. We have to see people for what they are and what we do. Schools have a tendency to whitewash history. But the true story is so much richer than the myth. I want to tell the true stories of how the past created our present. Without these seas that covered this area thousands of years ago we would have no energy jobs.

“Our stories need to be disrupted. It’s about working for the truth as opposed covering it up. How you live tomorrow, as an institution, is to know your past and use that to avoid mistakes in the future. It’s a cliché to say history will repeat itself, but it’s true.”

Greetings reader. I am a writer, architect, cyclist and father from Cambridge, MA. My primary blog, theawkwardpose.com is an archive of all my published writing. The title refers to a sequence of three yoga positions that increase focus and build strength by shifting the body’s center of gravity. The objective is balance without stability. My writing addresses opposing tension in our world, and my attempt to find balance through understanding that opposition. During 2015-2106 I am cycling through all 48 mainland United States and asking the question "How will we live tomorrow?" That journey is chronicled in a dedicated blog, www.howwillwelivetomorrw.com, that includes personal writing related to my adventure as well as others' responses to my question. Thank you for visiting.
View all posts by paulefallon →
This entry was posted in Responses and tagged Cabeza de Vaca, Janis Jopllin, Museum of the Gulf Coast, Port Arthur TX, Robert Rauschenburg, Stephanie Harren. Bookmark the permalink.