People are often surprised that I rarely check the weather. If it’s clear when I get up in the morning, I ride. If there’s a major weather event on the horizon, I hear about it. If I stayed put just because the forecast suggested showers, I would still be in Ohio. 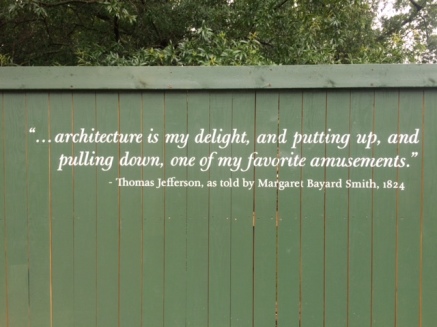 Today, however, was different. I woke to steady rain; only the second time on my trip. I checked weather.com and learned that it was not raining in Charlottesville and would not rain all day. Dubious data in the face of actual drops. The rain was real, but not really dangerous. So I pedaled off in my yellow slicker to visit Monticello. 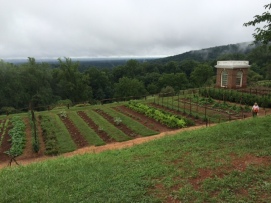 The full paradox of the South is on display in this incredible place constructed over the forty years of Thomas Jefferson’s public life. The man who penned the words, “All men are created equal” owned 600 human beings. That takes a lot of rationalization, which the guides and displays at Monticello weigh with great aplomb. I took the house tour and the slave tour (I’m not a garden tour kind of guy). Each guide was insightful, knowledgeable, and thoughtful.

I imagine the tours were very different thirty years ago. But since the Thomas Jefferson Foundation, which owns Monticello, acknowledged the descendants of Sally Hemming’s six children as part of the Jefferson family in 1998, it cannot shy away from the complex integrations that enabled this segregated society. Jefferson referred to his slaves as ‘servants’ or ‘family’. Every reference to every owned person today is preceded by the word ‘enslaved’. 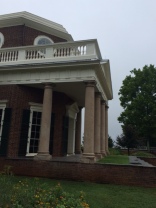 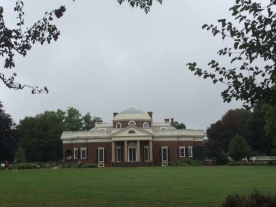 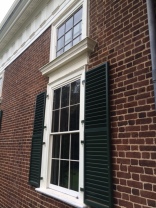 The amazing thing about Monticello is how the ideals of this great Enlightenment man, its magnificent architecture, the ingenious devices, careful planning, and breathtaking site all become secondary to the careful dance of how the masters and slaves coexisted. One tour guide closed with the Emerson quote: “If you put a chain around the neck of a slave, the other end fastens itself around your own.”

Two hundred years later, all that is best and worst about our nation can be distilled from Monticello: incredible resources, noble ideals, inconsistent opportunity, equality, and justice. 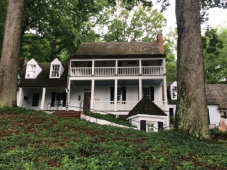 By two the rain had lifted and I rolled downhill to a sumptuous lunch at Michie Tavern, a southern food fest that included the best stewed tomatoes I’ve ever tasted. Sometimes I forget tomatoes are a fruit. I ladled them over fresh biscuits, sweet as any dessert. Bloated with history and sustenance, I returned to town and stayed in a nice alternative-vibe guesthouse.

Greetings reader. I am a writer, architect, cyclist and father from Cambridge, MA. My primary blog, theawkwardpose.com is an archive of all my published writing. The title refers to a sequence of three yoga positions that increase focus and build strength by shifting the body’s center of gravity. The objective is balance without stability. My writing addresses opposing tension in our world, and my attempt to find balance through understanding that opposition. During 2015-2106 I am cycling through all 48 mainland United States and asking the question "How will we live tomorrow?" That journey is chronicled in a dedicated blog, www.howwillwelivetomorrw.com, that includes personal writing related to my adventure as well as others' responses to my question. Thank you for visiting.
View all posts by paulefallon →
This entry was posted in Bicycle Trip Log and tagged Charlottesville VA, Michie Tavern, Monticello, Sally Hemming, Thomas Jefferson, Thomas Jefferson Foundation. Bookmark the permalink.