When William Helmreich was a kid growing up in New York City, he and his father played a game they called ‘Last Stop.’ “We would ride to the end of the subway line, get off and explore the neighborhood. Once we’d completed the last stops of every line, we went to the ‘second to last stop’ and so on, getting closer and closer to the center of the city.” He walked the city many times in a casual way until, in 2008, he decided to take a systematic approach. He has walked every block of the United States’ largest city; 30 to 35 miles per week, at all times of day, in all seasons and all weather: 6,048 miles total, the equivalent of walking across the United States and back again.

“Riding your bike is good, but it’s not as good as walking. When you walk, you don’t have to dismount to interact with others. Driving is even more remote. A nice car driving through a poor neighborhood is out of place. When you walk, you look like you belong.” 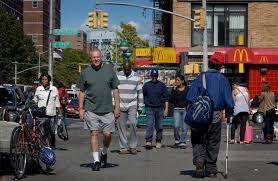 Bill realized that no sociologist had written a comprehensive book of all of New York City. Most sociologists focus on a discrete area and extrapolate. He decided to walk the entire city to get to the heart and soul of New York. “I study New York City because I’ve lived here my whole life.” Bill’s portrait of his hometown is The New York Nobody Knows: Walking 6,000 Miles in the City. The book has been a remarkable success; Bill now has contracts to write five more books – one on each borough.

“When you walk systematically, you are forced to confront every aspect of the city. People walk their relevant blocks. There are other blocks in the same zone that people never know.

“Sometimes it gets boring and you don’t often find things, but you sublimate and let your mind wander. At the very least, it’s healthy.

“I didn’t have a strategy for interacting; I talk with people as opportunity presents itself. My idea is to engage people; I talk with them first. If you are an extrovert, it comes naturally.”

Bill had two criteria for evaluating which of his experiences to include in his book: things that he encountered often, which represent the pattern of the city; and things that were truly unique, landmark experiences.

He directed me to visit the corner of Third Avenue and East Fifth Street in the Bowery, where the Hotel Standard is distinguished by its upside down sign. “Look at how the Bowery has been renewed. In the 1960’s, the Bowery was full of flophouses; the fancier the name, the worse the place.” In the spring of 1966 Bill stayed in a Bowery flophouse for five weeks to interview people in the area. “I specialize in interviewing people who are difficult to interview.”

“We haven’t solved our homelessness problem. It’s getting worse. The sense of disorder it creates makes the streets feel unsafe. If you walk from 34th Street to 14th Street, ten to fifteen people will approach you. This does not engender feelings of love. Ninety-five percent of the time nothing happens, but the fear is consistent.”

Bill is a savvy streetwalker, who dispels potential danger before it presents itself. He’s disarmed gang members by complimenting them on their jackets. When he can tell someone is going to approach him for money, he sometimes approaches him first. “My wife was worried about me, but I know how to walk the streets. No one ever bothered me in 6000 miles.”

At CCNY, where Bill is a sociology professor, he plays a game with his students: “Tell me your street and I’ll tell you a story about it.” He doesn’t like lecture format and avoids giving prepared talks. “I like to get questions. I like dialogue and conversation more than presentation.”

“Since 2000 we’ve become a surveillance society. We value our security over our privacy. There are cameras everywhere. Crime is down because people are aware that cameras are documenting everything. I used a recorder for interviews and no one even worried about it. We have come to assume that recording is natural.

“In order for me to understand the city, I have to be part of the city. I’m not doing Statue of Liberty and the Empire State Building. I’m doing the hidden parts of the city.”

“In a city like this it is impossible to predict how will we live tomorrow unless you narrow the focus. Maybe we should attack it from a different direction. Who will live in the city? Will we be a city of elites or will we be integrated?

“I see three groups emerging: the assimilationists who seek common identity, the separationists who want national and ethnic definition, and the large middle in between. However you divide us by ethnicity or black lives matter of any other component, the trend is that we are growing into a multi-ethnic society. We are growing more integrated, not less. Within 100 years, we will be a blend.

“How will Black Lives Matter be resolved? I don’t think it will. It’s fifty years since civil rights. We have had a black president for eight years. The people who have been killed are at the fringes of black society. More and more of black society is included within our society. The 1/3 are outliers. Nothing we’ve done seems to work. The Great Society and affirmative action have not been able to touch this group. They are an intransigent part of our legacy.”

Greetings reader. I am a writer, architect, cyclist and father from Cambridge, MA. My primary blog, theawkwardpose.com is an archive of all my published writing. The title refers to a sequence of three yoga positions that increase focus and build strength by shifting the body’s center of gravity. The objective is balance without stability. My writing addresses opposing tension in our world, and my attempt to find balance through understanding that opposition. During 2015-2106 I am cycling through all 48 mainland United States and asking the question "How will we live tomorrow?" That journey is chronicled in a dedicated blog, www.howwillwelivetomorrw.com, that includes personal writing related to my adventure as well as others' responses to my question. Thank you for visiting.
View all posts by paulefallon →
This entry was posted in Responses and tagged CCNY, New york City, The New York Nobody Knows, walking New York, William Helmreich. Bookmark the permalink.