About thirty years ago Carol Sabo and Mark Jacopec left the Toms River area and moved south. “That place has no soul.” They arrived in West Cape May, “bought the last house that sold for $100,000”, right on Broadway, and never looked back. Carol is a social worker for the State of New Jersey; Mark is a carpenter. Life in a resort town may not as predictable as other areas, but on a warm July evening, it is mighty comfortable. We sat on their front porch; they waved at half the people that passed by. Carol and Mark know everyone on this spit of sand. 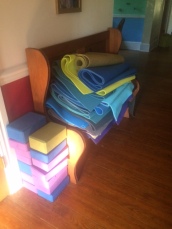 In 1997 Mark started facilitating drum circles, first in individual houses, then at schools and corporate events in Las Vegas and Miami. “A drum session is a way for corporations to get their folks out of their seats at big conventions.” Then 2008 came and that all ended. His gigs moved to Fresno and Cincinnati. “No one was showing their money.” So Mark stopped doing that. “Now, I’m pushing my energy to yoga.” He teaches a men’s class in his home once a week, teaches yoga to high school students in Atlantic City, and during the summer, runs yoga on the beach for the Congress Hotel in Cape May. “I just get the people once so I have to be flexible in my approach. It’s all about the breath to find their strength. The action starts in the hips and goes to the head. That’s where rhythm starts. That’s where our responses come from. You turn to catch the peanut butter jar falling out of the cabinet without thinking. The move comes from the hips.”

Carol is an avid gardener, a devotee of Esther Hicks, faithful to the ‘Law of Attraction.’ “I am fascinated by people’s life journey. Long term relationships.” That’s what makes us tick.

Other people come and go, especially in summer. Samuel Douglas Clark, an Australian actor lives there while playing Dracula in a summer stock production; a summer away from Brooklyn, his part-time work as a TKTs salesperson, and the constant round of auditions. He welcomes the time of reflection. “I’m 32. I’m good at what I do, but it’s hasn’t turned into anything stable. My friends are getting married, having children. Do I want that? If I do, I have to go home.”

Sam had fairly steady gigs in Australia, but he won the green card lottery and so came to the United States. “My life here looks fabulous to my Aussie friends. But they don’t see it all. Life in Australia is easy. The economy has grown continuously for over thirty years – an entire generation that’s never seen anything but growth. Wages are high, health care is good. Still, the U.S. is the place to be. If I went back to Australia, it would either signal that I’ve failed or because I want to settle down.”

“Acting is all about rejection. There are so many more rejections. I’m having a personal crisis right now, and regrets. Hopefully, I will live with less stress than yesterday and today.” – Sam

“Increasing mindfulness, greater regard for the things that are important. I am frustrated by people who rail against Monsanto and then say they can’t do anything. You can protest. You can plant a garden and buy less of their food. Start small but do something.” – Carol

Greetings reader. I am a writer, architect, cyclist and father from Cambridge, MA. My primary blog, theawkwardpose.com is an archive of all my published writing. The title refers to a sequence of three yoga positions that increase focus and build strength by shifting the body’s center of gravity. The objective is balance without stability. My writing addresses opposing tension in our world, and my attempt to find balance through understanding that opposition. During 2015-2106 I am cycling through all 48 mainland United States and asking the question "How will we live tomorrow?" That journey is chronicled in a dedicated blog, www.howwillwelivetomorrw.com, that includes personal writing related to my adventure as well as others' responses to my question. Thank you for visiting.
View all posts by paulefallon →
This entry was posted in Responses and tagged beach yoga, Carol Sabo, Congress Hotel Cape May, drum circle, Esther Hicks, Law of Attraction, Mark Jacopek, Samuel Douglas Clark, West Cape May NJ, yoga. Bookmark the permalink.